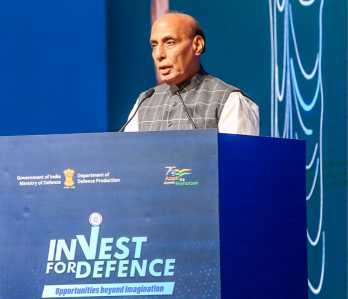 Raksha Mantri Shri Rajnath Singh invited investment from domestic industry and Foreign Original Equipment Manufacturers (OEMs) in the Indian defence sector and asked them to take advantage of the opportunity to integrate into the global supply chains, during the ‘Invest for Defence’ investor outreach event organised as part of 12th DefExpo in Gandhinagar, Gujarat on October 20, 2022.

Referring to the enthusiastic participation of domestic industry and businesses, the Raksha Mantri said the trust of the industry stakeholders is encouraging and reflects their faith in the Indian defence sector. He said that this is a golden period for Indian Defence Industry, which will be a sunrise sector in the years to come. Sharing the government’s future plans for the defence sector, he said that the target is to increase defence production from USD 12 billion to USD 22 billion by 2025. This provides unparalleled opportunities for growth to the industry in the coming years, he added.

Shri Rajnath Singh questioned the earlier view of a dichotomy between economic development and security, and asserted that they are complementary. He noted that this approach has changed in the past few years and now these two concepts are integrated, as they strengthen each other. “Today, the nation is integrating and moving forward with these two capabilities, which complement each other, and making unparalleled improvements in both,” said Shri Rajnath Singh. He added that economic and strategic capabilities are essential for development of science and technology, health, agriculture, trade and commerce.

Highlighting the achievements of the domestic Defence industry, the Raksha Mantri said it has demonstrated capabilities by building Fighter Aircraft, Aircraft Carrier, Main Battle Tanks and Attack Helicopters and gained experience to further build on this ecosystem. “This experience will help in supporting and developing defence weapons/systems for future generations”, he added. He termed DefExpo 2022 as an excellent platform for existing and prospective investors to become a part of the phenomenal growth of the Indian defence industry.

Shri Rajnath Singh observed that it is natural for investors to look for profit and offered a value proposition. He said the country has skilled human resources and a healthy population and the government has taken several steps to further enhance this aspect. He referred to the financial measures that have enabled banks to extend loans, boost capital availability and led to establishment of a venture capital funding culture.

In the field of technology, the Raksha Mantri added that the government has improved lab to industry linkage for organisations such as CSIR and DRDO and introduced initiatives such as Innovations for Defence Excellence (iDEX) and Technology Development Fund to provide financial support for upgradation and innovation in products, systems, processes for the Armed Forces. Foreign Direct Investment norms in the Defence sector have been liberalised to 74% through the automatic route, and 100% through government route and trading in stock markets has become more transparent, which has also benefited defence companies, he said.

Shri Rajnath Singh added that the government has dedicated one fourth of the Defence R&D budget to industry led R&D to encourage private players. He stated that providing markets to industry is part of the Government’s commitment to build an ‘Aatmanirbhar Bharat’

“To increase the participation of domestic industry in the defence sector, the government has reserved 68% of the defence capital acquisition for domestic procurement for the year 2022-23, which is approximately Rs. 85,000 crores and 25% of this has been reserved for domestic private industry”, he said.

The Raksha Mantri stressed that all these measures have increased defence exports in the past few years. He reiterated the unlimited possibilities of growth for the Indian Defence Industry and invited businesses to invest in the sector.

‘Invest for Defence’, the first ever marquee event of Ministry of Defence, was targeted to promote investment in the defence sector in the country both by the Indian industry as well Foreign OEMs.

Earlier, a panel discussion was held with the Vice Chiefs of the three-armed forces, DG (Acquisition), and CEOs from Airbus, Lockheed Martin, SAAB, Adani Defence & Aerospace, Bharat Forge and L&T. The Indian Air Force informed that huge opportunities will be available to industry for indigenous networking infrastructure, critical to security and 62,000 lines are likely to be available for indigenization in next 10 years.

The Army said that it is going through major upgradation resulting in a huge scale of opportunities. Two systems – Man-portable Anti-Tank Guided Missiles and Very Short-range Missile systems – are an urgent requirement along with consumables like small arms.

Director General (Acquisition), MoD, informed that the procurement process is being overhauled and the Ministry of Defence is in the process of developing, in the next one year, a AoN bank of USD 50 billion.

During the discussion, Adani Defence & Aerospace projected huge investments to the tune of Rs. 5,000 Crores in priority areas of information processing, AI/ML, Unmanned systems etc. Additionally, the company said that it is investing in UP Defence Industrial Corridor to set up an Ammunition facility. It also shared a plan to set up the largest Maintenance and Repair Operations (MRO) facility to cater to both Defence & Civil areas. Further, Lockheed Martin shared its plans for establishing MRO and Multi Role Fighter Aircraft facilities in the country and integrating local manufacturers into the global supply chain. SAAB India also announced that it is planning to commence production of launchers in India by 2024.

iDEX also hosted a panel session on ‘The India Opportunity – Aerospace and Defence’ during the event. The panelists consisting of Leading Venture Capitalists, financial institutions and legal entities spoke about their outlook for the Indian Defence sector and re-affirmed their commitment to achieve Atmanirbhar Bharat in the aerospace and defence sector. On the sidelines of the event, a B2B session was held in coordination with IIFL Finance on the theme ‘Opportunities from Large Platforms’. The session was attended by the CMDs of DPSUs and CEOs of large private companies, startups and MSMEs. An Investor Demo pitch was also organized in collaboration with SINE IIT Bombay, where iDEX Deeptech Startups showcased their technologies to investors. After the session, the DIO received intent of investments from several investors.