The Raksha Mantri also laid the foundation stone for an integrated Metal Manufacturing Facility under PTC industries that will produce key Raw Materials in Titanium and other Exotic Alloys for aerospace applications. This plant will significantly reduce the country’s dependence on imports for all platforms which require Titanium and Nickel Super Alloys and help in building a strong and Atmanirbhar Bharat. 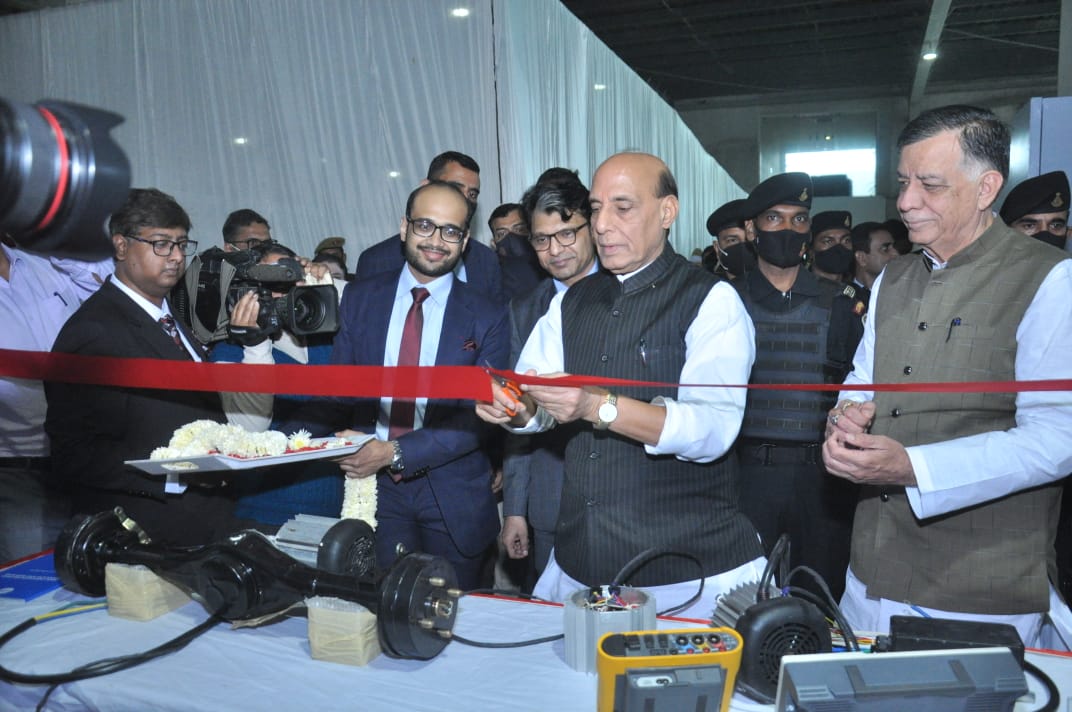 Shri Rajnath Singh applauded PTC Industries Limited as an example of how in today’s competitive environment an company can be successful through adoption of technology and said that the two units will prove to be major milestones in the path of self-reliance in defence in the times to come. He added that UPDIC and the units are a result of the vision of Prime Minister Narendra Modi for an ‘Aatmanirbhar Bharat’. He appreciated the fact that PTC supplies products to renowned companies in India and abroad, contributing to the Government’s vision of transforming India into a net defence exporter. On PTC obtaining the clearance certificate of critical On-line Fittings (OLFs) for defence applications from Ministry of Defence recently, Shri Rajnath Singh said, the clearance will prove to be a big step in ‘Make in India’ and achieving self-reliance in defence manufacturing.

The Raksha Mantri recalled the significance attached to industries by great stalwarts of our nation such as Babasaheb Bhimrao Ambedkar, Madan Mohan Malviya, Subhas Chandra Bose, Veer Savarkar, M. Visveshwarya and others. Terming the inauguration of the unit as a shining example of the strong public-private partnership, he asserted that the Government is taking forward the vision of former Prime Minister late Atal Bihari Vajpayee who believed in the continuous & increased private sector participation for the development of the nation. 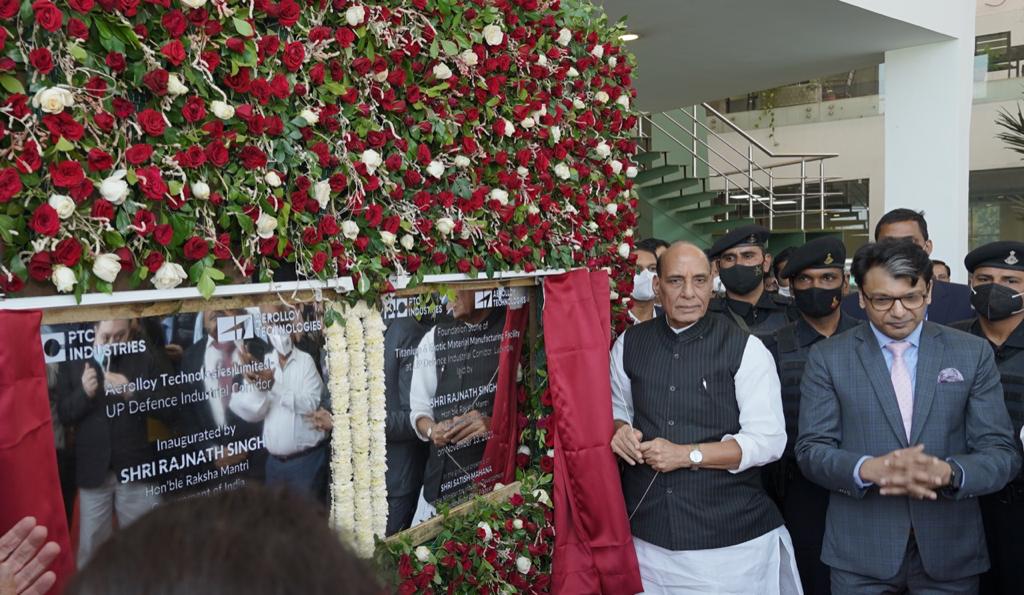 The Raksha Mantri emphasised the need for continuous modernisation of Armed Forces in the rapidly changing global security environment and said that the public & private sectors, academia and research & development organisations provide solutions to these problems. “The Indian defence industry has the potential to develop quality and cost-effective equipment which will not only bolster national security, but export the military hardware to the world. Companies like PTC Industries Limited can play an important role in this,” he said.

Reaffirming the Government’s resolve of ‘Make in India and Make for the World’, Shri Rajnath Singh listed out a series of measures undertaken to achieve self reliance in defence, including earmarking around 64 per cent of its modernisation funds under capital acquisition budget for 2021-22 for procurement from domestic companies; notifying two positive lists of over 200 items to increase exports and Defence Acquisition Procedure 2020, setting up of Defence Industrial Corridors in UP & Tamil Nadu; free Transfer of Technology of DRDO and Innovation for Defence Excellence (iDEX) initiative.The Raksha Mantri added that all efforts are being made to provide a suitable growth environment to the private sector. “We have opened up opportunities to build a Mega Defence Programme, including fighter aircraft, helicopters, tanks and submarines through a strategic partnership model which will help our private companies grow in stature and become global giants in the times to come. Recently, a Rs 22,000 crore contract was signed for transport plane ‘C-295’. Most of these planes will be made in India in collaboration with our industry.

Shri Rajnath Singh said that as the nation is currently celebrating Azadi Ka Amrit Mahotsav, this is an opportunity to give a fresh impetus to our resolve to Make in India and Make for the world. He noted that the Armed Forces have also supported the drive for Aatmanirbharta in Defence. Shri Rajnath Singh stated that all these initiatives by the government have resulted in an increase in the number of contracts being awarded to the indigenous defence industry. This includes the recent LCA Tejas contract of about Rs 50,000 crore given to Hindustan Aeronautics Limited. He stressed that from prioritising procurement from Indian-IDMM (Indigenously Designed, Developed and Manufactured) categories to supporting R&D, the Government is striving to harness technology through active engagement with industry, academia, technology providers, equipment manufacturers, quality controllers etc.

The Raksha Mantri underlined that the steps undertaken by the Government have started to bear fruit. “In the last seven years, our defence exports have crossed the mark of Rs 38,000 crore and more than 10,000 SMEs have joined in the defence sector. Research & development, startup, innovation and employment has also increased as a result of these policies,” he added.

Underscoring the importance of learning from the past and working on the present for an empowered future, Shri Rajnath Singh exhorted the private industry to carry out in-house R&D or with academia, making full use of the Government’s policies and stay ahead in the race of development of state-of-the-art technology. He also urged them to make the local community a partner in their success by adopting local ITI, apprenticeship programme, schools and hospitals. This will be a true contribution to society and the country, he said.

The Raksha Mantri expressed confidence of increased investments by private companies in the near future and hoped that city of Lucknow and the state of Uttar Pradesh will make a mark in the manufacturing domain of defence and aerospace sector.

Uttar Pradesh Minister for Industrial Development Shri Satish Mahana expressed gratitude towards Raksha Mantri Shri Rajnath Singh for bringing initiatives, including Brahmos to Uttar Pradesh. Hailing the visionary leadership of Prime Minister Narendra Modi, the Minister said that competition in the defence sector will lead to an Aatmanirbhar Bharat. He further expressed confidence that UP will become the most preferred destination for investment.

Shri Sanjay Jaju, elaborated on the vision of Make in India and Aatmanirbhar Bharat, saying that the infrastructure and facilities offered by UPDIC will attract fresh investment in all 6 nodes. This, he said, will help the nation achieve its goal of self reliance. Shri Awanish Awasthi, briefed the gathering on the UPDIC and said that the state government would ensure land availability and logistical support for all investors. Other officials of the Ministry of Defence and the state government as well as industry representatives and investors were also present on the occasion.