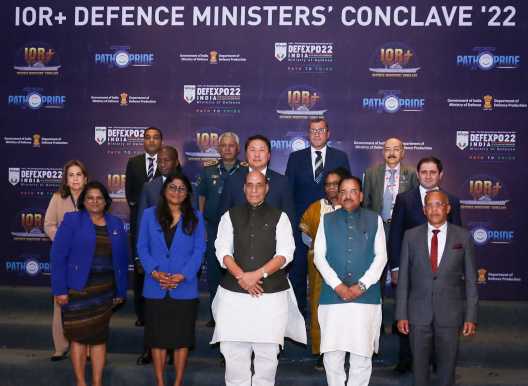 After the huge success of ‘Indian Ocean Region (IOR) Defence Ministers’ Conclave’ held in February 2021, Raksha Mantri Shri Rajnath Singh hosted IOR+ Defence Ministers’ Conclave on the sidelines of 12th DefExpo in Gandhinagar, Gujarat on October 19, 2022. The conclave was attended by 40 countries, with 22 ministers addressing the conference, some of them in hybrid mode. The broad theme was ‘Challenges Opportunities and Collaborations in the Indian Ocean’. It facilitated dialogue towards fostering a stable and peaceful Indian Ocean, with strategic and commercial partnerships within the IOR, in line with Prime Minister Shri Narendra Modi’s vision of Security and Growth for All in the Region (SAGAR).

Delivering the keynote address, Shri Rajnath Singh termed the conclave as an initiative to promote dialogue in an institutional and cooperative environment that can foster peace, stability & prosperity in the IOR. He stated that this forum has been named IOR+ as the idea of this conclave is shared responsibility and prosperity. “We believe in a multi-aligned policy which is realised through engagements with multiple stakeholders, so that views and concerns of all can be discussed and addressed for a prosperous future for all. India is willing to work with all the stakeholders to ensure a rules-based maritime order to the benefit of all in the region,” he said.

Shri Rajnath Singh cited Martin Luther King Junior’s statement ‘Injustice anywhere is a threat to justice everywhere’, stating that it holds the most relevance in this era of high connectivity and interdependence. “When peace and security of any region is threatened, the entire world feels its impact in multiple ways. The recent Ukrainian conflict showed how its ripple effects could adversely impact the energy and food security for the most vulnerable countries. Similarly, failing states pose a challenge not only to their region, but also to the world at large, since these states may act as nurseries of terrorism, piracy and trafficking. We believe that engaging our partner countries through forums like this allows us to appreciate each other’s concerns and helps create a global order which is beneficial to all of us,” he said.

The Raksha Mantri called for collective efforts towards addressing the present and emerging threats to security & stability in the IOR. He stated that Prime Minister Shri Narendra Modi has already outlined India’s commitment and vision to tackle global concerns in his dynamic five ‘S’ vision, which comprises Samman, Samvaad, Sahyog, Shanti and Samriddhi (Respect, Dialogue, Cooperation, Peace and Prosperity). Shri Rajnath Singh voiced India’s determination to play a responsible role and contribute to regional and global security. “We have demonstrated our commitment in organizational as well as operational aspects at various bilateral and multilateral forums of the IOR and look forward to furthering our engagement to ensure that the region takes its rightful place as the driving engine of the global economy in the near future,” he said.

Shri Rajnath Singh listed out shared challenges in the IOR such as spread of terrorism through sea routes, Illegal, Unreported and Unregulated (IUU) Fishing, piracy and regional and global food security. He asserted that terrorism, exported, supported or coordinated through maritime routes remains a major concern and India continues to guard against the spread of the menace. He appreciated the fact that piracy has been suppressed in the Western Indian Ocean with concerted international effort and sustained efforts must continue to deter the menace.

On IUU fishing, the Raksha Mantri called for a multi-national effort for compilation, collation and sharing of surveillance data, collected from diverse sources, i.e., satellites, radar, reconnaissance planes or human intelligence. It will help in identifying actors with irregular or threatening behaviour, which then will have to be countered resolutely, he said.

Shri Rajnath Singh reiterated that India unequivocally rejects any hierarchical conception of global order and the pretensions of moral superiority in international relations. He asserted that New Delhi believes in a global order based on mutual respect and benefit of every country. “We do not subscribe to the zero-sum paradigm of strategic competition. Rather, we believe in a win-win paradigm of international relations. India looks forward to working with the representatives of Government, Business and Academia of our partner countries for promoting cooperation and closer interaction among the nations, seeking peace and stability of IOR,” he said.

The Raksha Mantri termed sustainable exploitation of maritime resources as an important means for growth and development of nations across the IOR in the 21st century. He called for a collaborative effort in ensuring that the maritime expanse of the Indian Ocean is peaceful and optimally harnessed for ensuring regional and global food security. “We have demonstrated our respect for a rules-based order and continue to stress on the need to nurture Indian Ocean as a region of peace and stability. We would like to reiterate that interdependence instead of dominance is the only way to keep this important trade and energy waterway stable. With half the world’s container shipment, one-third of its bulk cargo traffic and two thirds of oil shipments being carried across it, the IOR clearly assumes a very important place in our international affairs,” he said.

Shri Rajnath Singh reiterated the Government’s commitment to build capacities of partner countries by providing ships, maritime aircraft, Coastal Radar and other Surveillance systems, training, access to Indian shipyards and availability of trained manpower for indigenous development of similar capacities. He stated that the Aerospace & Defence sector in India has come a long way, with private and public sector industries at the forefront of developing state-of-the-art technologies.

Shri Rajnath Singh urged the IOR countries to leverage the R&D ecosystem created by the Government in India for the mutual benefit for all. He said, with the right policies and framework, India is poised to be a global R&D hub. “Our start-up ecosystem, particularly in the defence sector, is one of the world’s biggest and is playing a significant role in crafting a self-reliant India. Polices and frameworks are now in place for fostering innovation and technology development in defence and aerospace industry. We have a lot to learn from our partner countries, and a lot to share with them,” he said.

On climate change, Shri Rajnath Singh said, it has a huge impact on the maritime environment and its effects can pose challenges for taking forward national & regional aspirations. He asserted that India has been the first responder in a large number of Humanitarian Assistance & Disaster Relief (HADR) requirements in the region for the last few years, making special mention on the SAGAR missions and Operation Samudra Setu during the COVID-19 pandemic. He, however, called for a broader and deeper disaster management collaboration between the IOR countries to better respond to adverse events. “We have been engaging with navies in the region and will continue to do so. We wish to move ahead from ‘Sailing together’ to ‘Operating together’ in order to meet the challenges in the future,” he said.

In his welcome remarks, Defence Secretary Dr Ajay Kumar highlighted the crucial role of the Indian Ocean as a civilisational link across the globe. He said, India’s growing global integration means that the Indian Ocean is one of the top policy priorities. He termed maritime security cooperation as a vital component of India’s diversified cooperation portfolio in the IOR and mentioned various initiatives, including the Indo Pacific Oceans Initiative proposed by Prime Minister Shri Narendra Modi at the East Asia Summit in 2019, which furthers practical cooperation. The Defence Secretary reiterated that India is ready to work on bilateral, multilateral and regional fora for ensuring development and continued stability in the IOR region.

Vice Chief of the Naval Staff Vice Admiral SN Ghormade delivered a talk on the theme ‘Leveraging Technologies and Holistic Capacity Building – Pathway to Safe and Secure Oceans’ highlighting the role of emerging technologies as the primary enabler for maritime capacity building.

The conclave organised by the Department of Defence Production, Ministry of Defence. The initiative was very well received and highly appreciated by all participating countries.