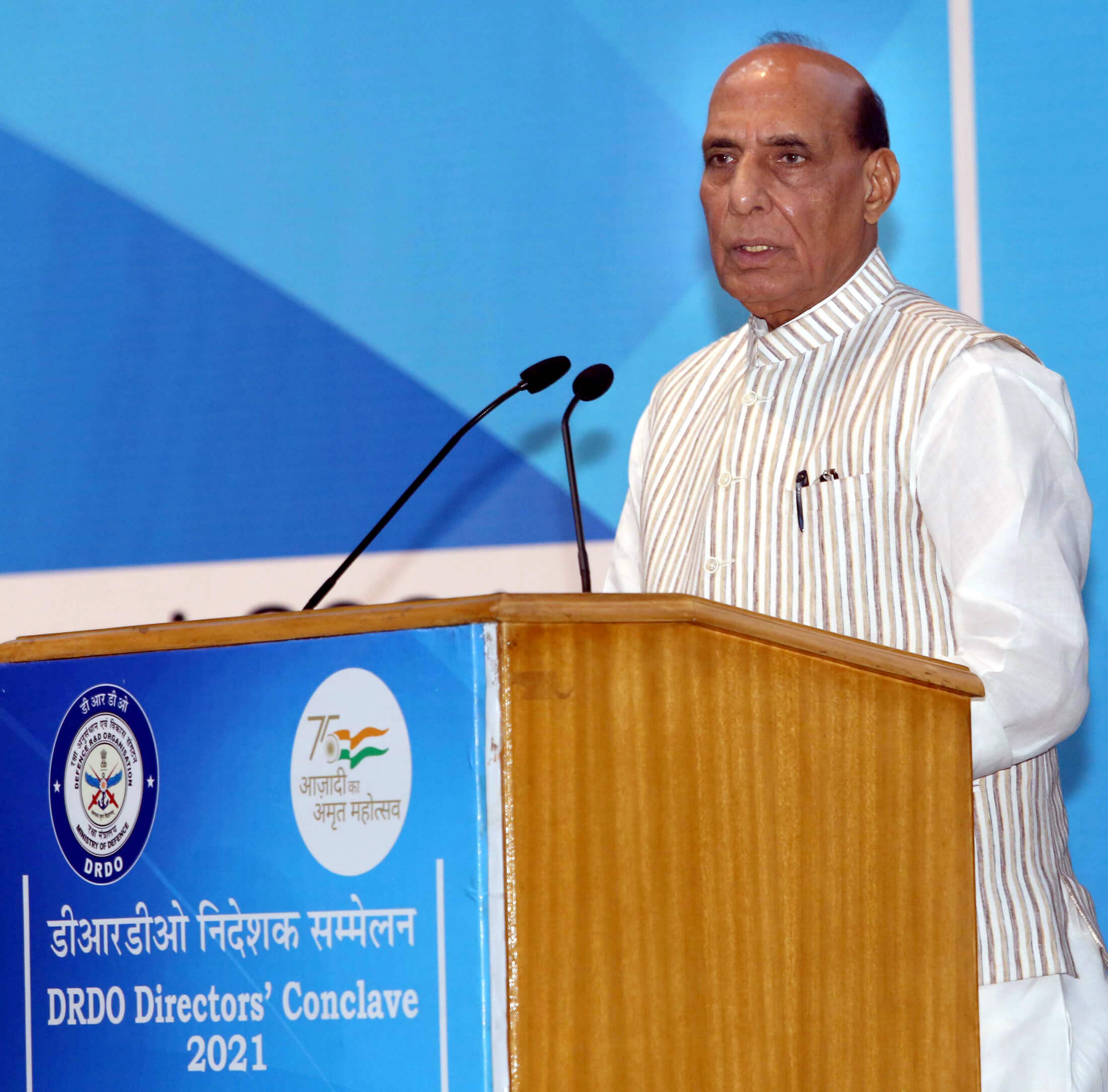 Raksha Mantri Shri Rajnath Singh felicitated the winners of ‘Dare to Dream 2.0’ Contest of Defence Research & Development Organisation (DRDO) in New Delhi on October 04, 2021. The Raksha Mantri gave away awards to 40 winners – 22 in Individual category and 18 in Startup category. He also launched ‘Dare to Dream 3.0’ to promote innovators & startups and provide a platform for the young ignited minds in the country.

Dare to Dream is DRDO’s pan-India contest to promote Indian academicians, individuals and startups to develop emerging defence and aerospace technologies/systems. DRDO provides technical and financial support to the winners for realisation of their ideas under the Technology Development Fund (TDF) scheme.

Shri Rajnath Singh also gave away DRDO Young Scientists awards for the year 2019. Sixteen DRDO scientists, under the age of 35 years, were awarded for their outstanding contribution in areas of their expertise. 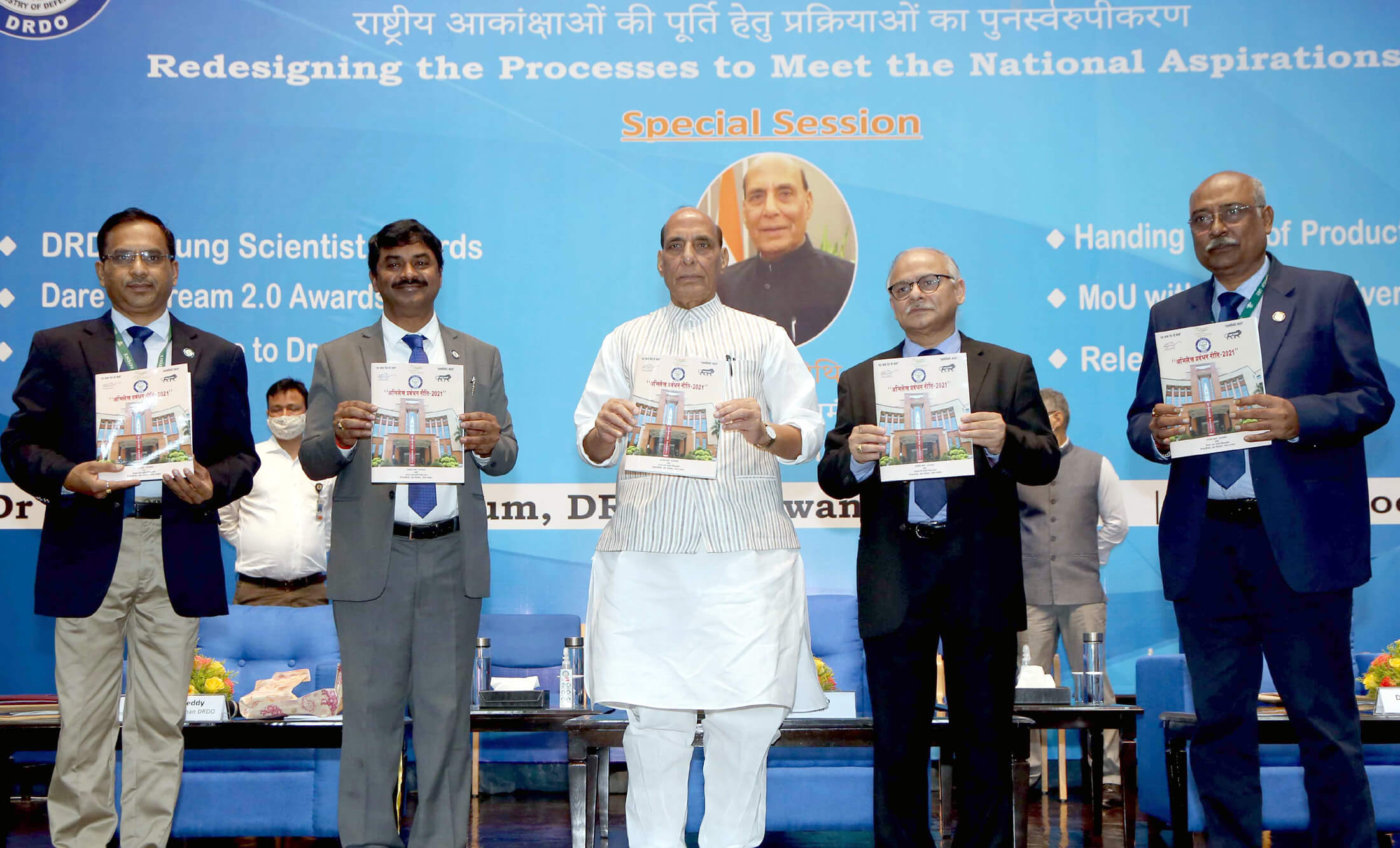 Congratulating the winners of ‘Dare to Dream’ and ‘DRDO Young Scientists’ awards, Shri Rajnath Singh said, they reflect the energy, enthusiasm and commitment of the youth of the country to create something new. He exuded confidence that the winners in the fields of innovation, design & development will inspire young minds and create path-breaking innovation in future. The ‘Dare to Dream’ challenge, he said, represents the vision and mission of the Government as also the mandate of DRDO.

The Raksha Mantri reiterated the Government’s resolve to build a strong and self-reliant ‘New India’ which, he said, can only be achieved through a collaborative effort. He termed ‘effort’ and not just ‘desire’ as the key for an individual, society and the nation to achieve success. Saying that India is one of the oldest countries in experience & culture and the youngest with about 60 per cent of the young population, he encouraged the youth to observe, learn & create new innovations and play their part in taking the country to greater heights.

Pointing out that global security concerns, border disputes & maritime affairs have forced the world to focus on military modernisation, Shri Rajnath Singh reaffirmed the Government’s commitment to modernise the Armed Forces and equip them with latest machinery to deal with any challenge. He described the power of the youth as the hope for the country and called upon the young ignited minds to help the Government in achieving the objective of ‘Aatmanirbhar Bharat’.

“Developing new technologies indigenously is the need of the hour. Our vision of ‘Aatmanirbhar Bharat’ is to ensure that advanced technologies are developed domestically. It is extremely important not just for strengthening national security but also ensuring overall development of the country,” said the Raksha Mantri.

Describing private sector participation as crucial to achieving ‘Aatmanirbhar Bharat’, Shri Rajnath Singh stated that the Government, led by Prime Minister Shri Narendra Modi, has taken a series of reform steps to increase the participation of private industry in the defence sector which has created a suitable growth environment and provided a big boost to indigenous defence capabilities. He listed out some of these steps, including bringing in new categories of acquisition in Defence Acquisition Procedure (DAP) 2020; provision of a specific budget for defence modernisation; notifying two Positive Indigenisation lists; increasing FDI in defence; according top priority to capital procurement and Buy {Indian – Indigenously Designed Developed and Manufactured (IDDM)} to promote indigenous design & development of defence equipment; creating opportunities to build a Mega Defence Programme including fighter aircraft, helicopters, tanks and submarines through Strategic Partnership Model; opening avenues for free Transfer of Technology (ToT) through DRDO and initiatives like Innovations for Defence Excellence (iDEX) and Technology Development Fund.

The Raksha Mantri asserted that due to these measures, the number of contracts being awarded to defence industry have increased; new MSMEs & startups have emerged and more employment opportunities created. “We are not only meeting our domestic needs, but are also exporting technology & equipment to foreign countries,” he added.

Shri Rajnath Singh lauded DRDO for playing a central role in the Government’s efforts of achieving self-reliance in defence manufacturing and contributing immensely in enhancing the capacity & capability of the Armed Forces even in the rapidly changing geo-political situation. He said, the recent contracts and induction of Light Combat Aircraft (LCA) Mk-1A, Main Battle Tank Arjun Mk-1A and Medium Range Surface to Air Missile system are some noteworthy contributions.

“DRDO is not only trying to match the capabilities of technologically advanced countries, but is also equally engaged in innovation of new technologies. The new generation programmes of DRDO will upgrade our Armed Forces in future as well,” the Raksha Mantri hoped.

The Raksha Mantri commended DRDO Young scientists’ lab and Advance technology Centres for working in futuristic technologies such as nano technology, quantum computing, artificial intelligence, unmanned and robotic technologies. Terming it as the new dimension of ‘New India’, he called for increased R&D efforts in such futuristic technologies. He stressed on the need to develop dual use technologies which can be beneficial for both Armed Forces personnel and civilians. He urged all the stakeholders to focus on research & development in order to provide state-of-the-art equipment to the Armed Forces. This will help in establishing the country’s identity in the international market and achieving the vision of ‘Make in India, make for the world’, he said.

Shri Rajnath Singh exhorted the Industry representatives to take full advantage of the policies of the Government and create an organic synergy with DRDO and other government agencies. Saying that Transfer of Technology from DRDO is bearing fruit, he hoped that in the times to come the industry would develop in-house R&D systems on its own.

Cautioning against working in silos and laying special emphasis on identifying cost and time over-run projects and delivering them efficiently in a time-bound manner, the Raksha Mantri called for strengthening the linkages between academia, Industries and DRDO. This collaboration, he said, would ensure overall development.

On this occasion, three products/systems indigenously developed by DRDO were also handed over to the Armed Forces. These are:

The two-day annual DRDO Directors’ Conclave 2021, which began on October 03, 2021, will conclude today. The theme of the conclave is ‘Redesigning the processes to meet the national aspirations’.

In his address, DRDO Chairman Dr G Satheesh Reddy listed out the recent achievements of DRDO and stressed on developing mechanisms for faster development of advanced technologies and ease of working with industry & academia. He congratulated all the awardees and wished them a bright future.

Senior civil and military officials of Ministry of Defence and Industry representatives were among those present on the occasion.