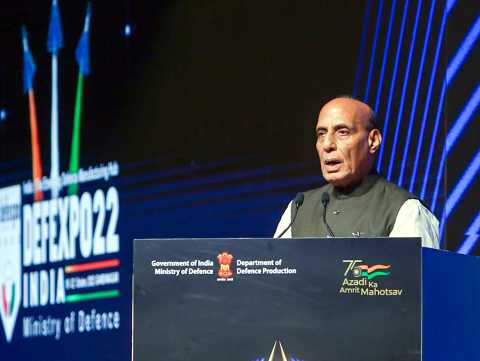 Raksha Mantri Shri Rajnath Singh has said, the flight of an Aatmanirbhar Defence depends on the two wings of industry, manufacturers and supply on one hand and armed forces, users and demand on the other. He was speaking at a seminar organised by FICCI in coordination with Headquarters of Integrated Defence Staff on ‘Aatmanirbhar Bharat & Make in India: Roadmap for the Armed Forces’ as part of 12th DefExpo in Gandhinagar, Gujarat on October 20, 2022.

Shri Rajnath Singh emphasised the need to balance these two wings of the Indian Defence sector to attain new heights. Addressing the gathering, Shri Rajnath Singh highlighted the need for indigenization of defence equipment and technology and uniqueness in planning to maintain a surprise element in our response to adversaries. He acknowledged that our preparedness in responding to challenges of the rapidly changing geo-political scenario, particularly neighbourhood threats, has grown in recent years and efforts are on to continue this progress.

The Raksha Mantri said acquisition of military equipment was delayed and their uniqueness was compromised, as also it was comparatively below the standards of others. In such a situation, it’s imperative for India to indigenise. Raksha Mantri listed various steps taken to strengthen our defence industry through making capital and technology available, development of R&D ecosystem and a large market. He mentioned reservation of 68% of the capital acquisition budget for domestic industry for 2022-23, 25% of domestic capital procurement from private industry, MSMEs and start-ups, reservation of 25% of the Defence R&D budget to promote industry, start-ups and academia, Defence Innovation Start-Up Challenges and Technology Development Fund as steps that have been taken to encourage private industry and MSMEs.

Shri Rajnath Singh emphasised the importance of quality in defence products and technology, saying that any compromise in this respect hurts our national interest and pride. He exhorted all stakeholders to develop the best defence technologies in the world to forge an identity for our defence industry on the national and international stage. Raksha Mantri appealed to the armed forces for their continued support to the domestic industry and appreciated their full cooperation to Aatmanirbharta in defence sector. He mentioned that more than 400 items are now on the indigenization list with the fourth list being issued on 19th October, 2022 at Defence Expo 2022. He pointed out that there is a need for a balance between indigenous and imported items to fulfil our requirements and in general we should focus on our indigenous production capability.

Earlier, Chief of Defence Staff General Anil Chauhan addressed the seminar and expressed his firm belief that no country can aspire to grow stronger without achieving self-reliance in defence research and development and manufacturing. Chief of Defence Staff pointed out that recent developments have highlighted the fragile nature of regional and global nature, reinforcing the belief in Aatmanirbharta in Defence. He said that the emerging geo-political scenario has made the three services realise the importance of Aatmanirbharta, reflected in the positive indigenization lists. General Chauhan informed the attendees that contracts worth Rs. 62,000 crores have already been signed and orders worth about Rs. 7 lakh crores are under various stages of procurement with the Indian Defence industry. He recalled successes in this sphere such as commissioning of INS Vikrant, induction of the HAL developed Light Combat Helicopter Prachand into the Indian Air Force and growing reach of indigenously designed weapons systems. General Chauhan also noted that India’s Aatmanirbharta model is not averse to collaboration between Indian Defence establishment, private enterprises and Foreign OEMs.

The three service chiefs, domestic industry representatives and officials from the government of India attended the seminar.