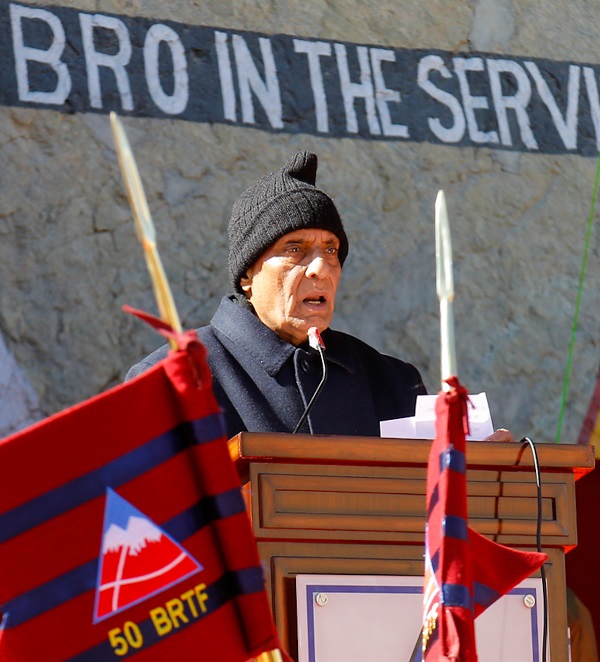 Raksha Mantri Shri Rajnath Singh dedicated to the nation 75 infrastructure projects built by the Border Roads Organisation (BRO)at a function organised at D-S-DBO road in Ladakh on October 28, 2022. These 75 projects – 45 bridges, 27 roads, two Helipads &one Carbon Neutral Habitat– are spread across six states & two Union Territories (UTs). Twenty (20) of these projects are in Jammu & Kashmir (J&K); 18 each in Ladakh& Arunachal Pradesh; five in Uttarakhand and 14 in other border states of Sikkim, Himachal Pradesh, Punjab &Rajasthan.

These strategically important projects have been constructed at a total cost of Rs 2,180 crore by the BRO in record time, many of which have been completed in a single working season using state-of-the-art technology. Appreciating the grit and determination of BRO for achieving the feat despite challenging weather conditions, the Raksha Mantri pointed out that the projects will bolster the country’s defence preparedness & ensure economic development of border areas.

The highlight of the event was the onsite inauguration of 120-metre long Class 70 Shyok Setu on D-S-DBO Road at an altitude 14,000 feet. The bridge will be of strategic importance as it will facilitate logistics movement of the Armed Forces. Other projects inaugurated virtually by the Raksha Mantri include two helipads, one each in Hanle and Thakung, in Eastern Ladakh. These helipads will enhance the operational capabilities of the Indian Air Force in the region.

The BRO’s first Carbon Neutral Habitat at a height of 19,000 feet for its personnel was also inaugurated at Hanle. It is BRO’s effort towards contributing to Ladakh’s resolve of becoming the country’s first Carbon Neutral Union Territory. The key features of this complex include accommodation of 57 personnel and thermal comfort during extreme weather. It will enable BRO to operate efficiently during large part of winters.

Speaking on the occasion, Shri Rajnath Singh reaffirmed the Government’s commitment to ensure the progress of far-flung areas to fulfil the security needs of the country, stressing that infrastructure development, along with the valour of the Armed Forces, was the main reason that helped India to effectively deal with the recent situation in the northern sector. He termed the new 75 projects as a testament to that resolve and said that these bridges, roads & helipads will facilitate military and civil transport in far-flung areas of the western, northern and north-eastern parts of the country, forming a part of development chain. He described connectivity with border areas as one of the focus areas of the Government for the holistic development of the nation.

“Lack of infrastructure development in J&K for decades post independence was one of the reasons behind the rise of terrorism in the UT. These internal disturbances resulted in significant decline in tourist footfall that impacted Ladakh also, as well as the entire nation. Now, due to the Government’s efforts, the region is witnessing a new dawn of peace& progress. Our aim is to continue with the development of all states/UTs of the country. Soon, all the remote areas will be connected with the rest of the country and together we will take the nation to newer heights of progress. BRO has a crucial role in achieving this objective,” Shri Rajnath Singh said.

On the occasion, Shri Rajnath Singh also laid the foundation stones of Himank Air Despatch Complex being constructed in Chandigarh & a BRO Museum at Leh. With the onset of winter, once the passes close due to heavy snowfall, BRO extensively utilises air effort for movement of men, machinery and material to far-flung areas. The existing Air Despatch sub unit located at Chandigarh is being upgraded for providing comfort to transiting troops and to ensure efficient and uninterrupted delivery of essential stores and equipment for execution of works on ground. The BRO will be undertaking the construction of the new Complex at Chandigarh by incorporating the latest 3D printing technology and once completed, the building will boast of being the world’s largest 3D Printed Complex.

To honour the sacrifices of its personnel and institutionalise and put on record the achievements of BRO, a Museum at Leh is being set up, which will be a source of information and inspiration. This museum building will also be constructed using 3D Printing Technology and on completion, will become the world’s highest 3D Printed Building.