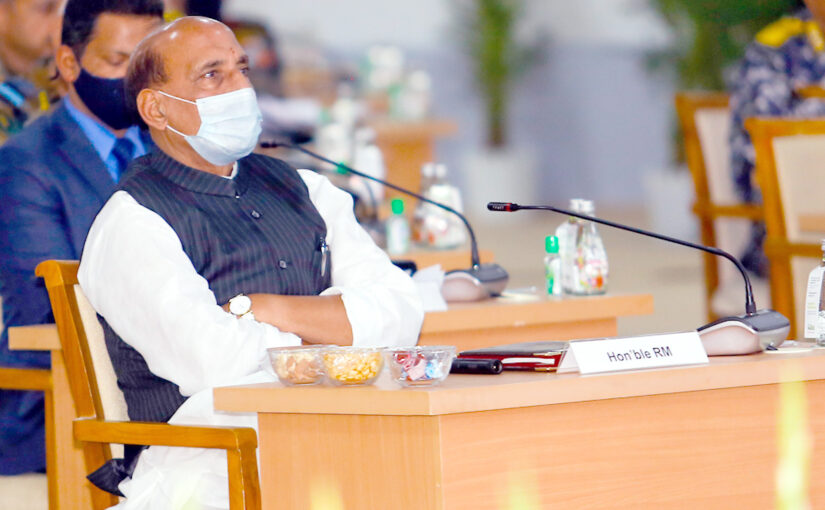 The Raksha Mantri Hon’ble Rajnath Singh joined the Combined Commanders of the Armed Forces for the Vivechana Sessions at the ongoing Combined Commanders Conference 2021 at Kevadia in Gujarat. Soon after arriving at Kevadia, the RM visited the Statue of Unity to pay his homage to the Iron Man of India, Sardar Vallabh Bhai Patel.

Delivering the inaugural address, the Raksha Mantri dwelled on a wide spectrum of issues affecting the defence& security of the Nation. He spoke at length on the emerging nature of military threats, the critical role of the Armed Forces in meeting these threats and the anticipated changes in the nature of warfare in future. Hon’ble RM expressed his heartfelt appreciation and respect to the selfless courage displayed by the soldiers during the Eastern Ladakh standoff with PLA. Secretaries of Department of Defence, Defence Production, Department of R&D and Financial Advisor Defence Services also shared their thoughts on various relevant aspects with the Combined Commanders.

The two Vivechana sessions held over the day in the presence of the Defence Minister deliberated over a wide range of issues, some of them held behind closed doors. These deliberations addressed the ongoing modernisation of Armed Forces especially focusing on the creation of integrated Theatre Commands and infusion of modern technology. Issues like morale & motivation and promotion of the spirit of innovation in the Armed Forces witnessed enthusiastic participation with useful feedback and suggestions from the soldiers and younger officers of the three Services.