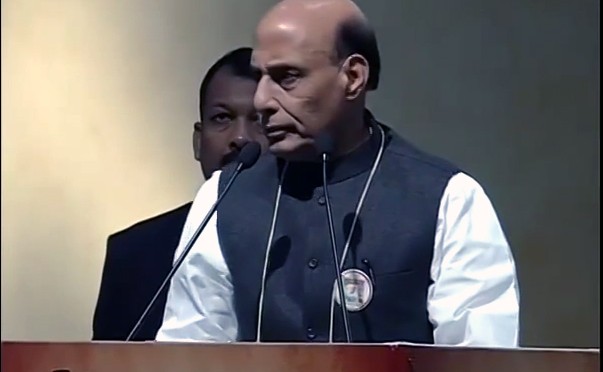 Shri Rajnath Singh has visited Moreh, a small border town on the banks of Lokchao river, in Chandel district of Manipur along with Shri Kiren Rijiju and the Assam Rifles officer briefed them on India-Myanmar border. The Home Minister has also met the jawans of Assam Rifles and said that they are doing a good job at India-Myanmar border. The Centre has proposed an integrated check post here which will be functional soon, he added.

Later, both the Ministers have visited the ‘Friendship Bridge’ which connects India and Mayanmar at Moreh.

The Union Home Minister has said that India-Myanmar share a very cordial and warm relationship. The Centre is looking forward to resolve border issues with Myanmar amicably through negotiation, he added. He also said that India-Myanmar border offers unique opportunity to open links and routes for trade & commerce with East Asian countries.

After visiting the border town of Moreh, the Union Home Minster has a meeting with the District Magistrates and Superintendents of Police at Imphal. He also met the Chief Minister, Chief Secretary, Director General of Police and members of the security agencies at Imphal.

The Union Home Minister, Shri Rajnath Singh and the Minister of State for Home Affairs, Shri Kiren Rijiju will be visiting Tripura tomorrow.