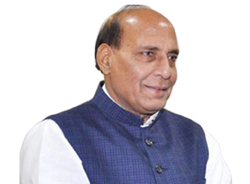 The Union Home Minister suggested the Karnataka Police to fill up all its vacancies which was nearly 20 percent of its total strength, on a priority basis. He also asked them to adopt latest technology and modernize the forces.

Shri Rajnath Singh instructed the authorities to take action on reports of discrimination against people from the North Eastern states living in Bangaluru. The Home Minister also asked the State administration to remain vigilant on illegal immigration from Bangladesh in Karnataka. Action against the sale of pre-activated SIM cards in the State was also discussed in the meeting.

The Government of Karnataka requested the Centre to sanction two extra Indian Reserve Police battalions for the state and the Union Home Minister has assured them that their demand would be positively examined. Shri Rajnath Singh also stated that the Centre will consider increasing the number of Marine India Reserve Battalions in the state to strengthen its coastal security.