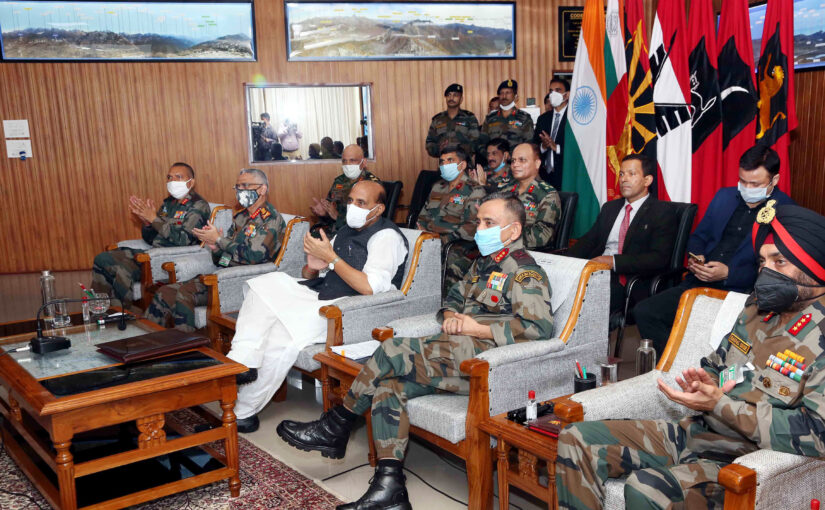 Raksha Mantri Shri Rajnath Singh dedicated the 19.85 Km Alternate Alignment of the National Highway 310 from km 0.00 to km 19.350 to the nation. Necessitated due to the previous alignment having seen extensive damages due to sinking and other natural hazards, the road serves as an important link to bolster defence preparedness in the Nathula Sector in particular and in whole of East Sikkim in general. The ceremony was held through video conference from the 33 Corp Hq in Sukhna due to inclement weather. Raksha Mantri while addressing the gathering on the occasion complimented the BRO for this achievement and said it is upgrading to double-lane most border roads in Sikkim.

Raksha Mantri Shri Rajnath Singh emphasised the Government’s drive towards progressing infrastructure development in far flung areas not only to enhance defence preparedness but also for fostering socio-economic development of the region. Reiterating the Centre’s resolve to speed up infrastructure development in align with Prime Minister’s Act North East policy, Shri Rajnath Singh highlighted the pace at which construction of the alternate alignment, which had been held up since commencement in 2009, was facilitated over the last two years.

The Chief Minister of Sikkim brought out the positive impact of the new alignment on boosting tourism as well as the socio-economic development of the state. Emphasising that tourism is the main bulwark of the state’s economy, the Chief Minister was highly appreciative of the BRO and the Central Government  for completing the road expeditiously.

The 19.85 Km Alternate Alignment of the National Highway 310 was dedicated to the nation today. This new alignment will bolster defence preparedness in the Nathula Sector. Congratulations to BRO for its unwavering commitment towards delivering outstanding quality infrastructure. pic.twitter.com/ytJlagqVld

The BRO over the last some years has undertaken an unprecedented expansion of its capabilities through technology infusion in material, equipment and construction techniques. The Atal Tunnel, DS-DBO Road, the new alignment of the National Highway 310 are examples of high quality, fast paced results delivered by the BRO towards strategic and operational preparedness. The Raksha Mantri also highlighted the future works that the BRO is to undertake and expressed confidence that the mission of Aatmanirbhar Bharat will progress by leaps and bounds in the years ahead.