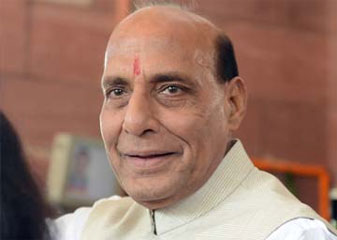 Rajnath Singh calls for Promotion of Education with Scientific Temper and Skills 27-February, 2015 .

Union Home Minister Shri Rajnath Singh has called for promotion of Education with Scientific Temper and Skills. Underlining the need for moral and cultural values, he appealed the students to participate in the process of nation building and contribute in making the country a developed nation of the world. Addressing the First Convocation of Sharda University in Greater noida today, Shri Rajnath Singh said that scientific temper and professional skills without proper value education can be dangerous. He said that certain well qualified individuals are found indulging in terrorist and anti-national activities in the absence of cultural and moral values.

The Union Home Minister said that in ancient times India was a seat of knowledge around the globe. He said that universities like Takshila and Nalanda were great centres of learning. He quoted philosophers like Voltaire to highlight India`s importance in the field of science, culture and knowledge. Shri Rajnath Singh said that we lost appreciation of our glorious past due to British colonialism. He said Lord Macaulay wrote to the British Parliament in 1835 that it will be difficult to suppress India for long unless its self-esteem is spoiled and its backbone of spiritual and cultural knowledge is broken. Shri Rajnath Singh said that when he served as the Education Minister of Uttar Pradesh, he introduced `Vedic Mathematics` in school textbooks despite resistance from many intellectual quarters preferring the Western education system.

Shri Rajnath Singh remarked that ancient India has been a repository of scientific knowledge and temper. He said India gave the world the concept of Zero, decimal system and solutions to the quadratic equation in algebra. He said that the winner of `Fields Medal`, Prof Manjul Bhargav from Princeton University has found a deep connection between Mathematics and Sanskrit. Even the great astronomer and cosmologist Carl Sagan once observed that ancient India`s cosmological calculations were the nearest in tune with modern scientific calculations