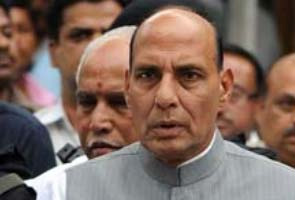 Rajnath Singh advises Uddhav to let MNS join the Saffron alliance or have seat adjustments with Sena in Maharashtra.

Bharatiya Janata Party president Rajnath Singh on Wednesday stunned the Shiv Sena by asking Uddhav Thackeray to mend fences with his bête noire, Raj Thackeray, chief of the Maharashtra Navnirman Sena (MNS). Singh gave this advice to Uddhav when the latter called on him in New Delhi.

Singh is reported to have told Uddhav that he should either let the MNS join the Sena-BJP-RPI-Swabhimani Shetkari Sanghagtana alliance in Maharashtra or at least agree to have seat adjustments with Raj.

However, a senior BJP leader said his party is not rigid on this issue. “The Shiv Sena’s problem is that it wants to get industrialist Rajkumar Dhoot re-elected to the Rajya Sabha and also give another ticket to Pune-based builder Sanjay Kadade. There are several senior leaders in their party, but the preference is for industrialists and builders. The Sena leadership is making an unnecessary issue of Singh’s observation,” he added.

In the past too, then president of BJP Nitin Gadkari had favoured an understanding between the saffron alliance and the MNS. Gadkari had even met Raj to work out the contours of a possible tie-up with the MNS. However, Uddhav fiercely opposed any such move.

The BJP sent out a message to Uddhav by getting Gujarat chief minister Narendra Modi to invite Raj to his state to see the development work underetaken by his government.

However, subsequently Uddhav managed to win over Modi and formed a firm bond with Modi, who is now BJP’s prime ministerial candidate.

The Sena was happy that a rift has emerged between Raj and Modi since that would further politically isolate the MNS.

However, its happiness has turned out to be short-lived with Singh favouring a soft approach towards the MNS.

Sources in the BJP said Singh was keen on ensuring that anti-incumbency votes are not divided in Maharashtra, which is a politically significant state with as many as 48 Lok Sabha seats. The BJP’s assessment is that there is widespread resentment in the state against the Congress-NCP coalition.

“If we are to successfully convert this anger against the state government into political gains, it is necessary that there is no division of anti-Congress-NCP votes. In the past, the MNS has demonstrated its ability to eat into Shiv Sena votes. This can be avoided by letting the MNS come on board the Maha Yuti (grand alliance) comprising Shiv Sena-BJP-RPI-Swambhimani Shetkari Sanghatana,” a senior BJP leader observed.

He said that the saffron combine had already received a boost with the RPI and Raju Shetti’s Swabhimani Shetkari Sanghatana joining it.

“The MNS has caused considerable electoral damage to our party in the past and Raj has heavily criticised Uddhavji several times in the past. It will be difficult to have a tie-up with the MNS,” a Shiv Sena MP stated.

Uddhav is expected to discuss this issue at the party’s conclave in Alibaug on Thursday and ascertain views of the second-rung leadership before taking a stand on the matter. His own personal view, it is learnt, is that the MNS, which is a weakening political force in the state, will now receive a fillip if even a seat-sharing understanding is worked out with it. The picture is likely to become clear after the Sena activists discuss the issue threadbare at Alibag on Thursday.

Meanwhile, the Shiv Sena is likely to support RPI leader Ramdas Athavale in the elections to the Rajya Sabha.