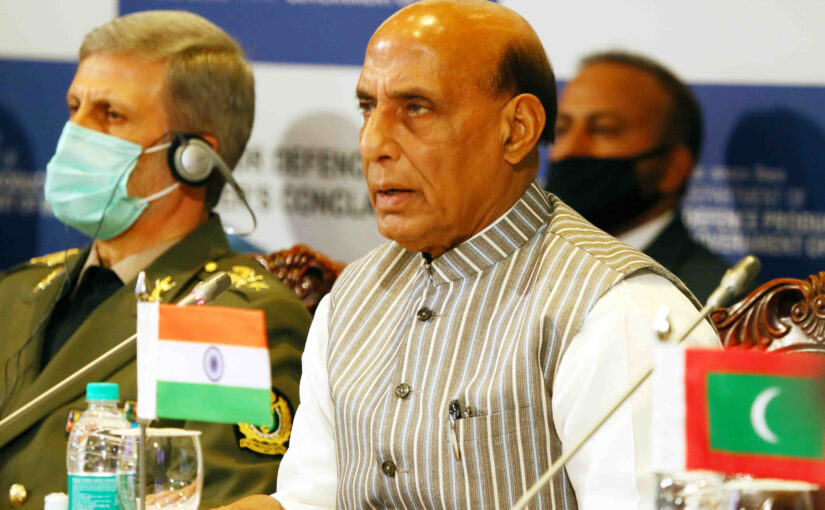 The Indian Ocean Region (IOR) Defence Ministers’ Conclave began with a keynote address from Raksha Mantri Shri Rajnath Singh on 4th February on the sidelines of Aero India 2021 in Bengaluru. Several Defence Ministers, Ambassadors, High Commissioners and senior officials from IOR countries have attended the event physically or in virtual mode. Outlining the agenda, Raksha Mantri said that as the largest nation in the IOR region with a vast coast line of 7500 Kms, India has an active role to play for peaceful and prosperous co-existence of all countries. Shri Rajnath Singh stressed that the Indian Ocean is a shared asset and a lifeline to international trade and transport due to its control of major sea-lanes carrying half of the world’s container ships, one third of the world’s bulk cargo traffic and two thirds of the world’s oil shipments.

Shri Rajnath Singh said SAGAR – Security and Growth for All in the Region is the theme of Indian Ocean Policy as outlined by Prime Minister Shri Narendra Modi in 2015. He added that in line with this the IOR conclave should focus on security, commerce, connectivity, fight against terrorism and inter cultural exchanges. Raksha Mantri identified areas such as deepening economic and security cooperation in the littorals, enhancing capacities to safeguard land and maritime territories, working towards sustainable regional development, Blue Economy, including sustainable and regulated fishing, and promoting collective action to deal with non-traditional threats like natural disasters, piracy, terrorism , illegal, unreported and unregulated (IUU) fishing etc. as inter-related elements of SAGAR. He said IOR faces a number of challenges such as piracy, smuggling of drugs/people and arms, humanitarian and disaster relief, and Search & Rescue (SAR) which can be met through maritime co-operation.

Raksha Mantri identified maritime resources as the key to sustained growth and development of IOR nations in the 21st century. He said that the negative impact of conflicting claims in some maritime areas of the world highlighted the need to ensure peace in the IOR region. He added that IOR countries have demonstrated mutual respect for a rules-based order and commitment to abide by international law. Raksha Mantri spoke of the various policy initiatives of the government to promote trade and tourism among IOR countries through sea link Sagarmala, Project Mausam, and Asia Africa Growth Corridor etc. He emphasized the need to take economic, trade, naval cooperation and collaboration further in the region. He said that the linked futures of IOR countries depend on how they tackle emerging challenges and leverage opportunities.

Referring to India’s growing Aerospace & Defence sector and its emergence as a global R&D hub with one of the world’s largest start up ecosystems, Raksha Mantri said IOR countries can leverage these sectors for mutual benefit. He said the recent order from the Indian Air Force to buy 83 Advanced Light Helicopters Mk-1A from Hindustan Aeronautics Limited (HAL) is a milestone in India’s indigenization of defence manufacturing capabilities. Shri Rajnath Singh added that India is ready to supply various types of weapons systems to IOR countries. Shri Rajnath Singh said that in consonance with the Prime Minister Narendra Modi’s vision of SAGAR, Neighbourhood First and Act East Policies, India has adopted a cooperative approach through capacity building assistance in partner countries. This was reflected in India’s supply of Indian made ships, maritime aircraft and setting-up of Coastal Surveillance Radar Systems, he said.

Raksha Mantri said India was developing a comprehensive Maritime Domain Awareness picture in the IOR, which has resulted in signing of Technical Agreements for sharing of ‘White Shipping Information’. He added that Humanitarian Assistance and Disaster Relief (HADR), Non-combatant Evacuation (NEO), and Search and Rescue (SAR) Operations are important and highlighted India’s swift response during the cyclones in Mozambique and Madagascar and reaching out to countries through medical teams, medicines such as hydroxychloroquine, Remdesivir and paracetamol tablets, diagnostic kits, ventilators, masks, gloves and other medical supplies through Operation-Sagar-I during COVID times. He further said that Op-SAGAR-II saw over 300 metric tons of humanitarian aid being delivered to 4 nations in the IOR.

Shri Rajnath Singh said vaccine supplies under grant assistance to Bhutan, Maldives, Bangladesh, Nepal, Myanmar and Seychelles have already highlighted India’s commitment to protect humanity from COVID-19. He said that India was conducting training programmes for immunization managers, cold chain officers, communication officers and data managers of the recipient countries before delivery of the vaccines. He highlighted development of effective response mechanism to humanitarian crisis and natural disasters in the IOR region as one of the most visible element of India’s Indian Ocean strategy.

27 out of 28 countries from the IOR region attended the conclave either physically or in virtual mode. In his closing remarks, Shri Rajnath Singh said the enthusiastic participation was a symbol of the collective desire of the nations of the IOR region to work together. He applauded the dynamism, ideas and conviction for a brighter future displayed at the conclave. Highlighting the global geopolitical and commercial significance of the Indian ocean, he said 75 per cent of global trade and 50 per cent of daily global transfers already pass through the region. He further said the deployment of ships by the Indian Navy and the Indian Coast guard for maritime security and anti-piracy operations had been successful in minimising threats to commercial shipping.

Shri Rajnath Singh said the conclave showcased what the IOR nations were capable of achieving in terms of trade, security and facilitation, fighting non-traditional threats, promoting uninterrupted access to the open seas. He emphasised that easy uninterrupted access to the open seas and respect for the international law was essential for stability and security in the region. Raksha Mantri ended his address by saying that he hoped that ideas germinated at the conclave would lead to sustainable action and partnerships.