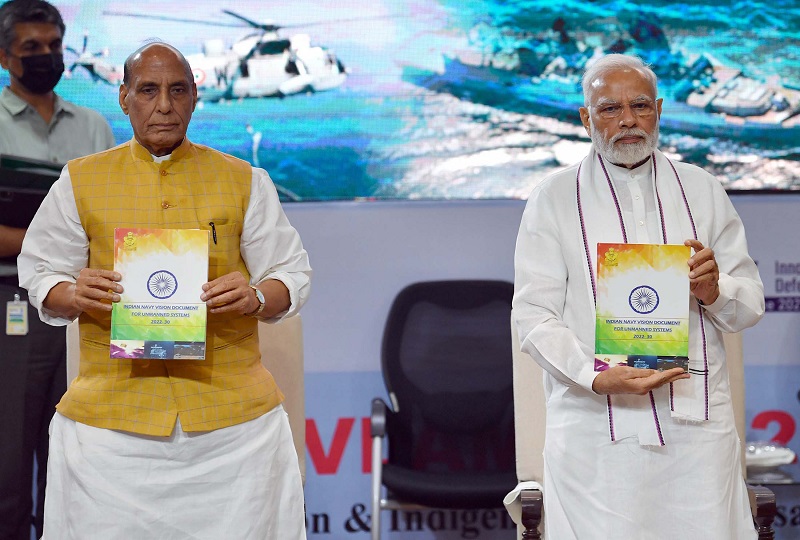 Innovation & indigenisation central to achieve ‘Aatmanirbharta’ in defence and overall goal of safety, security & prosperity of the Nation: Raksha Mantri

Prime Minister Shri Narendra Modi unveiled ‘SPRINT Challenges’, aimed at giving a boost to the usage of indigenous technology in Indian Navy, during Naval Innovation and Indigenisation Organisation (NIIO) seminar ‘Swavlamban’ in New Delhi on July 18, 2022. In a bid to achieve ‘Aatmanirbharta’ in defence and as part of ‘Azadi ka Amrit Mahotsav’, NIIO, in conjunction with the Defence Innovation Organisation (DIO), aims to induct at least 75 new indigenous technologies/products into the Indian Navy. This collaborative project is named SPRINT {Supporting Pole-Vaulting in R&D through Innovations for Defence Excellence (iDEX), NIIO and Technology Development Acceleration Cell (TDAC)}.

Addressing the gathering, the Prime Minister said the goal of self-reliance in the Indian defence forces is very important for India of the 21st century. Organizing the first ‘Swavlamban’ (self-reliance) seminar for a self-reliant Navy is an important step in this direction. The Prime Minister said that the resolution of creating 75 indigenous technologies in this period of making new resolutions for India is inspiring in itself and he expressed confidence that it will be fulfilled very soon. “We have to work to continuously increase the number of indigenous technologies. Your goal should be that when India celebrates 100 years of its independence, at that time our Navy should be at an unprecedented height”, he added.

Referring to the importance of oceans and coasts in India’s economy, Shri Narendra Modi said, the role of the Indian Navy is continuously increasing and therefore its self-reliance is of critical importance.

Recalling the glorious maritime tradition of the country, the Prime Minister stated that the defence sector of India used to be very strong even before independence. At the time of independence, there were 18 ordnance factories in the country, where many types of military equipment including artillery guns, were made in the country. India was an important supplier of defence equipment in World War II. “Our howitzers, machine guns made at the Ishapur Rifle Factory, were considered the best. We used to export a lot. But then what happened that at one point in time we became the world’s biggest importer in this field?”, he asked. He said like the countries who capitalized on the challenge of the World War to emerge as the big arms exporters, India too turned adversity into opportunity during the Corona period and made strides in economy, manufacturing and science. He lamented the fact that during the initial decades of the Independence, there was no focus on the development of defence production and research and development was severely limited due it being restricted to the government sector. “Innovation is critical and it has to be indigenous. Imported goods can’t be a source of innovation”, he said. He also stressed the need for a change in mindset of attraction for imported goods.

Shri Narendra Modi stressed the self-reliant defence system is critical for the economy and also from the strategic point of view. He said the country has worked in mission mode to reduce this dependence after 2014. He remarked that the Government has given new strength to our public sector defence companies by organising them in different sectors. Today we are making sure that we connect our premier institutions like IITs with defence research and innovation. “Learning from the approach of the past decades, today we are developing a new defence ecosystem with the strength of everyone’s efforts. Today defence R&D has been opened for the private sector, academia, MSMEs and start-ups”, he added. This has led to a new speed in long pending defence projects and the Prime Minister expressed the confidence that the wait for commissioning of the first indigenous aircraft carrier will be over soon.

In the last eight years, the Prime Minister noted that the Government has not only increased the defence budget, “we have also ensured that this budget is useful in the development of the defence manufacturing ecosystem in the country itself. Today, a large part of the budget earmarked for the purchase of defence equipment is being spent on procurement from Indian companies.” He also complemented the defence forces for preparing a list of 300 items that will not be imported.

In the last 4-5 years, Shri Narendra Modi said the defence imports have come down by about 21 per cent. Today we are moving fast from the biggest defence importer to a big exporter. Last year, Rs 13,000 crore worth of defence export was done with more than 70 percent of which being from the private sector, he pointed out.

The Prime Minister noted that now the threats to national security have also become widespread, the methods of warfare are also changing. Earlier we used to imagine our defence only till land, sea and sky. Now the circle is moving towards space, moving towards cyberspace, moving towards economic, social space. In such a scenario, the Prime Minister said that we have to move anticipating the future challenges and change ourselves accordingly. Self-reliance will help the country a great deal in this regard, he said.

The Prime Minister warned against the new danger. He said “we also have to intensify our war against forces challenging India’s self-confidence, our self-reliance. As India is establishing itself on the global stage, there are constant attacks through misinformation, disinformation and false publicity, etc. Keeping faith, the forces that are harming India’s interests, whether in the country or abroad, have to be thwarted in their every effort. National defence is no longer limited to borders, but is much broader. Therefore, it is equally necessary to make every citizen aware about it.” He continued “as we are moving forward with the ‘whole of the government’ approach for a self-reliant India, Similarly, the ‘whole of the Nation’ approach is the need of the hour for the defence of the nation.” “This collective national consciousness of various people of India is the strong basis of security and prosperity”, the Prime Minister concluded.

In his address, Raksha Mantri Shri Rajnath Singh defined innovation & indigenisation as important components, which are central to a strong and long-standing cooperation among the Armed Forces, Industry, R&D establishments & academia. This collaboration is needed to achieve ‘Aatmanirbharta’ in defence and the overall goal of safety, security and holistic development of the Nation, he said. Shri Rajnath Singh commended the Prime Minister’s vision of ‘Aatmanirbhar Bharat’, likening it with the Swadeshi movement of Father of the Nation Mahatma Gandhi. Asserting that ‘New India’ is making giant strides to achieve self-reliance with a new resolve, he exuded confidence that “we will soon end the dependency on imports and touch newer heights.

The Raksha Mantri pointed out that at a time when the Nation is celebrating ‘Azadi Ka Amrit Mahotsav’, a new dimension of ‘self-reliance’ has been added to the definition of freedom. “We have not only achieved self-sufficiency in food grains, but are one of its major exporter countries. Vaccines manufactured in India are saving lives of people all over the world. Our space craft is taking satellites of other countries into space. Today, India is not only self-reliant in many sectors, it is also fulfilling the needs of other countries,” he said.

Shri Rajnath Singh stressed that self-reliance not only means overcoming economic constraints, but also to achieve decisional autonomy for the country by overcoming diplomatic constraints. “The self-reliance efforts in the defence sector, under the guidance of the Prime Minister, have transformed India’s image and we will soon become a global manufacturing hub,” he said.

The Raksha Mantri appreciated the Indian Navy for playing a pioneer role in this endeavour by making remarkable progress in surface, sub-surface and air domains; setting up an ‘in-house-ship-design-organisation’ and transforming itself from a ‘Buyer’s Navy’ to a ‘Builder’s Navy’. He described the ever-increasing indigenous content in warships as a testament to Indian Navy’s unwavering commitment towards ‘Aatmanirbhar Bharat’, saying that it is a matter of great pride for the Nation that the shipyards and the industries are together developing the capacity and capability of the Armed Forces.

Shri Rajnath Singh informed the Prime Minister that in line with the ‘Aatmanirbhar Bharat’ campaign, the Indian Navy spent over 64% of its capital budget in domestic procurement in the last financial year and it is expected to increase to 70% in the current financial year. With active participation of the private sector, MSMEs and start-ups, innovation in the defence sector is being promoted through several projects under the iDEX initiative and ‘Technology Development Fund’. The Raksha Mantri highlighted that due to these efforts, Indian Navy has developed necessary capabilities to not only safeguard India’s maritime interests, but also of its friendly countries in line with the Prime Minister’s vision of ‘Security and Growth for all in the Region’ (SAGAR).

The Raksha Mantri was of the view that the role of the Indian Navy is going to increase further in the Indian Ocean Region and the Indo-Pacific in the times to come. He expressed confidence that the Indian Navy is ready to deal with every situation and will prove its mettle in all circumstances, whenever needed.

Shri Rajnath Singh called upon the students and researchers present at the seminar to come forward and make the Armed Forces and the Nation strong, prosperous and ‘Aatmanirbhar’ through research and innovation. He reiterated the Government’s resolve to achieve self-reliance not only in the defence sector, but in all domains and ensure sustainable development.

The two-day seminar, to be held on July 18-19, 2022, aims to engage Indian industry and academia towards achieving self-reliance in the Defence sector. It will provide a platform for leaders from Industry, Academia, Services and Government to come together on a common platform to ideate and come up with recommendations for the Defence Sector. Sessions dedicated to Innovation, Indigenisation, Armament and Aviation will be held. The second day of the Seminar will witness outreach to the Indian Ocean Region, in line with the government’s vision of SAGAR.