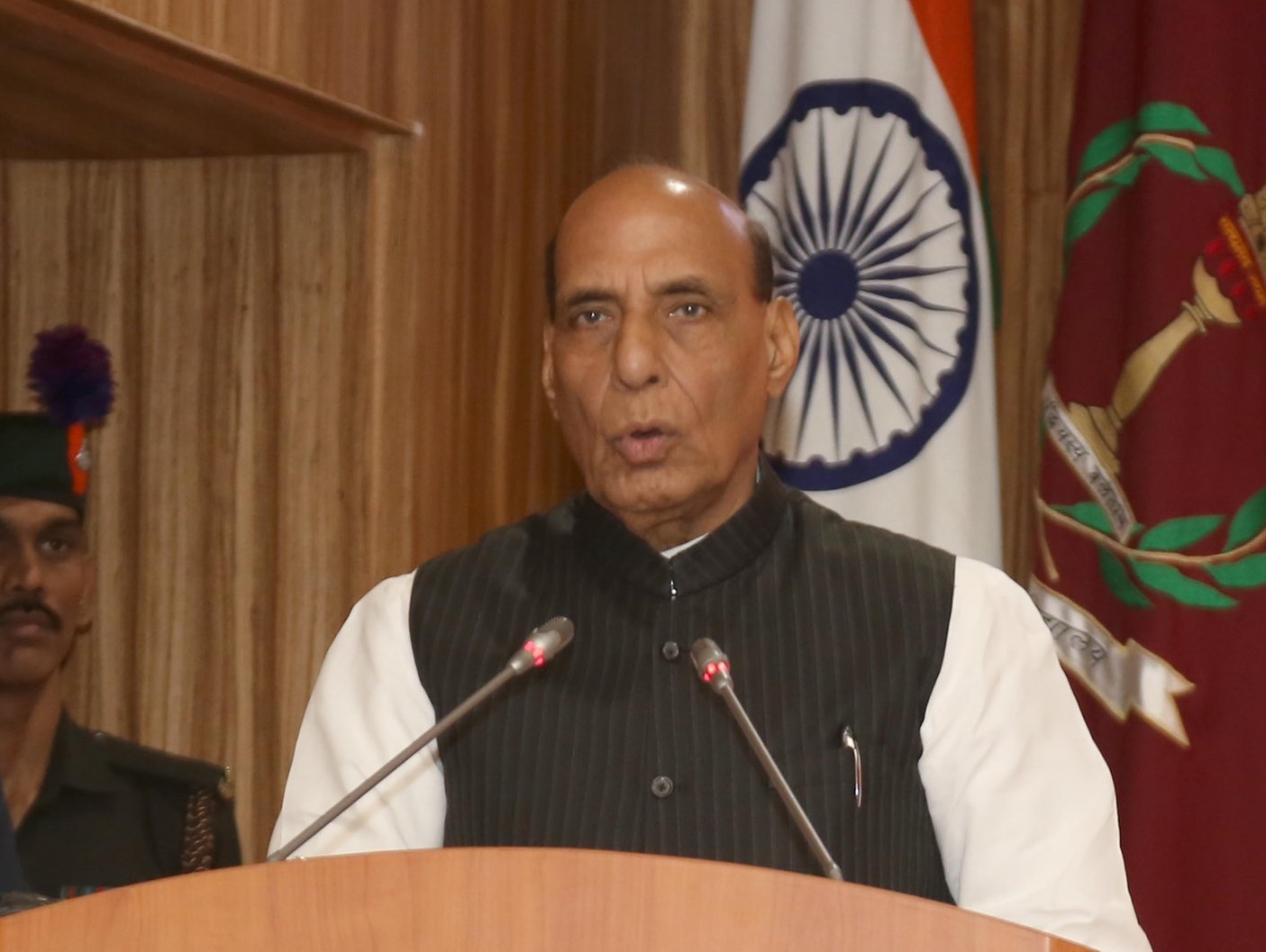 India believes in a multi-aligned policy, not a world order where few are considered superior to others, says Shri Rajnath Singh

Raksha Mantri Shri Rajnath Singh has called for concerted efforts of the international community to counter “grave” emerging security threats such as cyber-attacks and information warfare. He was addressing the officers of the Indian Armed Forces, Civil Services as well as from friendly foreign countries during the 60th National Defence College (NDC) course convocation ceremony in New Delhi on November 10, 2022. He termed national security as the prime focus of the Government, led by Prime Minister Shri Narendra Modi, stressing that the full potential of the country can be tapped only when its interests are protected. Security is sine-qua-non for civilisation to flourish and prosper, he said.

Shri Rajnath Singh threw light on the narrowing gap between internal and external security and said that new dimensions of threats are being added with changing times, that are difficult to classify. He asserted that terrorism, which generally falls into internal security, is now classified in the category of external security, as training, funding and arms support of such organisations is being carried out from outside the country.

With the changing times and society, the dimensions of security have also changed. Till the recent past, security was generally viewed in two aspects: Raksha Mantri

Describing the vulnerability of critical infrastructure to cyber-attacks as a big concern, the Raksha Mantri said, sectors such as energy, transport, public sector services, telecommunications, critical manufacturing industries and interconnected financial systems are prone to such threats. He was of the view that information war has the potential to threaten the political stability of a country. He pointed out that the organised use of social media and other online content generation platforms is engineering the opinion and perspective of the masses.

“The deployment of information war was most evident in the ongoing conflict between Russia and Ukraine. Throughout the conflict, social media has served as a battleground for both sides to spread competing narratives about the war and portray the conflict on their own terms. The propaganda campaigns as a means of strategy to shape narratives are by no means new during warfare, but its reach has increased by leaps and bounds due to the shift toward social media as the primary distribution channel,” said Shri Rajnath Singh.

Quoting Martin Luther King Jr, the Raksha Mantri stated that “Injustice anywhere is a threat to justice everywhere”. He emphasised that when peace and security of any region is threatened, the entire world feels its impact in multiple ways. “The recent Ukrainian conflict showed how its ripple effects could adversely impact the whole world. Together, Russia and Ukraine export nearly a third of the world’s wheat and barley, but this conflict had prevented grain from leaving the ‘breadbasket of the world’ and led to food crisis in various African and Asian countries. The conflict has also fuelled an energy crisis in the world. In Europe, oil and gas supply has been dwindling. India has also been affected as the Russia-Ukraine war led to a disruption in international energy supply, making the energy import much more expensive,” he said.

Shri Rajnath Singh stressed the need to consider security as a truly collective enterprise, which can create a global order beneficial to all. “National security should not be considered a zero-sum game. We should strive to create a win-win situation for all. We should not be guided by narrow self-interest which is not beneficial in the long-run. We should be guided by enlightened self-interest which is sustainable and resilient to shocks,” he said. The Raksha Mantri added that while many multilateral organisations, such as United Nations Security Council, are working in the field of security, there is a need to elevate it to a level of shared interests and security for all.

If security becomes a truly collective enterprise, then we can think of creating a global order which is beneficial to all of us. The global community has been working towards it and there exist a lot of multilateral organisations, working in the field of security like UNSC: RM

Referring to the global response to the Covid-19 pandemic, the Raksha Mantri said, it highlighted the urgent requirement of multi-national collaboration in information sharing, situational analysis, as also research, development and production of the vaccine. It highlighted the need for greater understanding, connect and cooperative initiatives between institutes and organisations within and across nations to handle issues of national and international security, he said.

Shri Rajnath Singh affirmed India’s belief in a multi-aligned policy, realised through diverse engagements with multiple stakeholders, so that the concerns of all can be addressed for a prosperous future. He termed it as the only way that can lead to shared responsibility and prosperity.

“Strong and prosperous India would not be built at the cost of others, rather, we believe in helping other nations to realise their full potential. India does not believe in a world order where few are considered superior to others. Our actions are guided by the very essence of human equality and dignity, which is a part of its ancient ethos and strong moral foundations. Realpolitik cannot be the fig leaf for being immoral or amoral. Rather, enlightened self-interest of nations can be promoted within the framework of strategic morality, which is predicated on the understanding and respect for the legitimate strategic imperative of all the civilised nations. It is for this reason that when we partner any nation, it is on the basis of sovereign equality and mutual respect. Forging relations comes naturally to India, as we work towards mutual economic development,” the Raksha Mantri said.

Enlightened self-interest of nations can be promoted within the framework of strategic morality, which is predicated on the understanding and respect for the legitimate strategic imperative of all the civilised nations: RM

Congratulating the officers from foreign countries for completing the course, Shri Rajnath Singh termed them as a bridge between India and the world. He exuded confidence that the course will pave the way for enhancing global security and prosperity. He added that the officers, who have completed the course, will be well equipped to not only handle all future challenges, but will also be able to synergise all elements of national power in a collaborative manner with other stakeholders of national security. 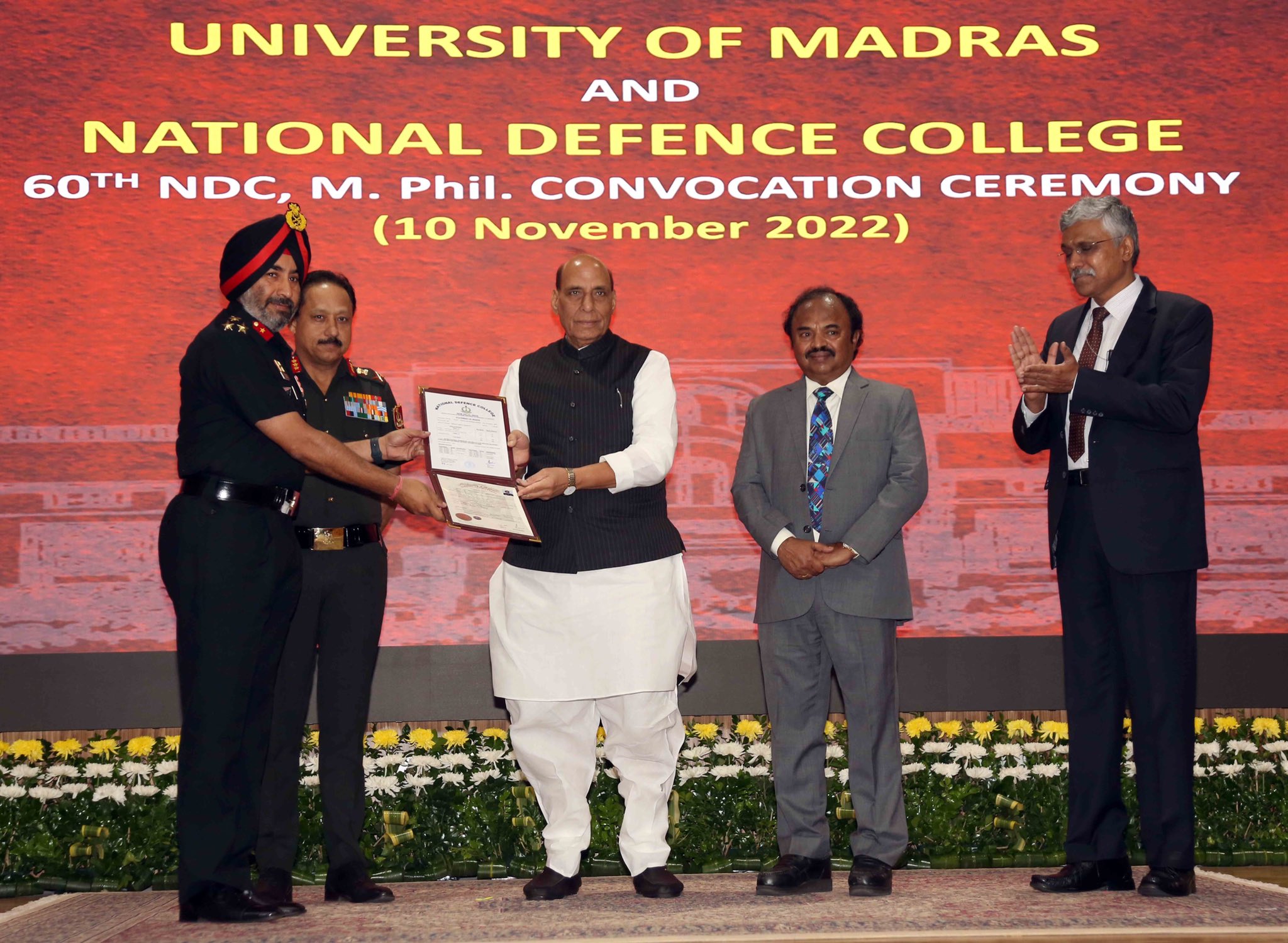 The Raksha Mantri appreciated how the NDC has been instrumental in fostering indigenous strategic thought and grooming generations of strategic leaders, thinkers and practitioners not only from India but also from abroad. He lauded NDC’s sustained efforts to stay abreast of developments in the global security landscape.

Strong and prosperous India would not be built at the cost of others, rather, India is here to help other nations realise their full potential: RM

During the convocation ceremony, eighty officers from the 60th NDC Course (2020 batch) were awarded the prestigious MPhil degree from the University of Madras. Shri Rajnath Singh awarded the parchments to the graduating officers. The NDC’s flagship ‘National Security and Strategy’ course, using a comprehensive pedagogical model, is conducted over a 47-week duration. The award of the MPhil degree from Madras University is a concurrently running programme for volunteer officers during the course.

I wish all of you, great success in your future endeavours and am confident that you will earn great laurels for yourself and your countries. And in doing so you will make both this country and the NDC proud: RM 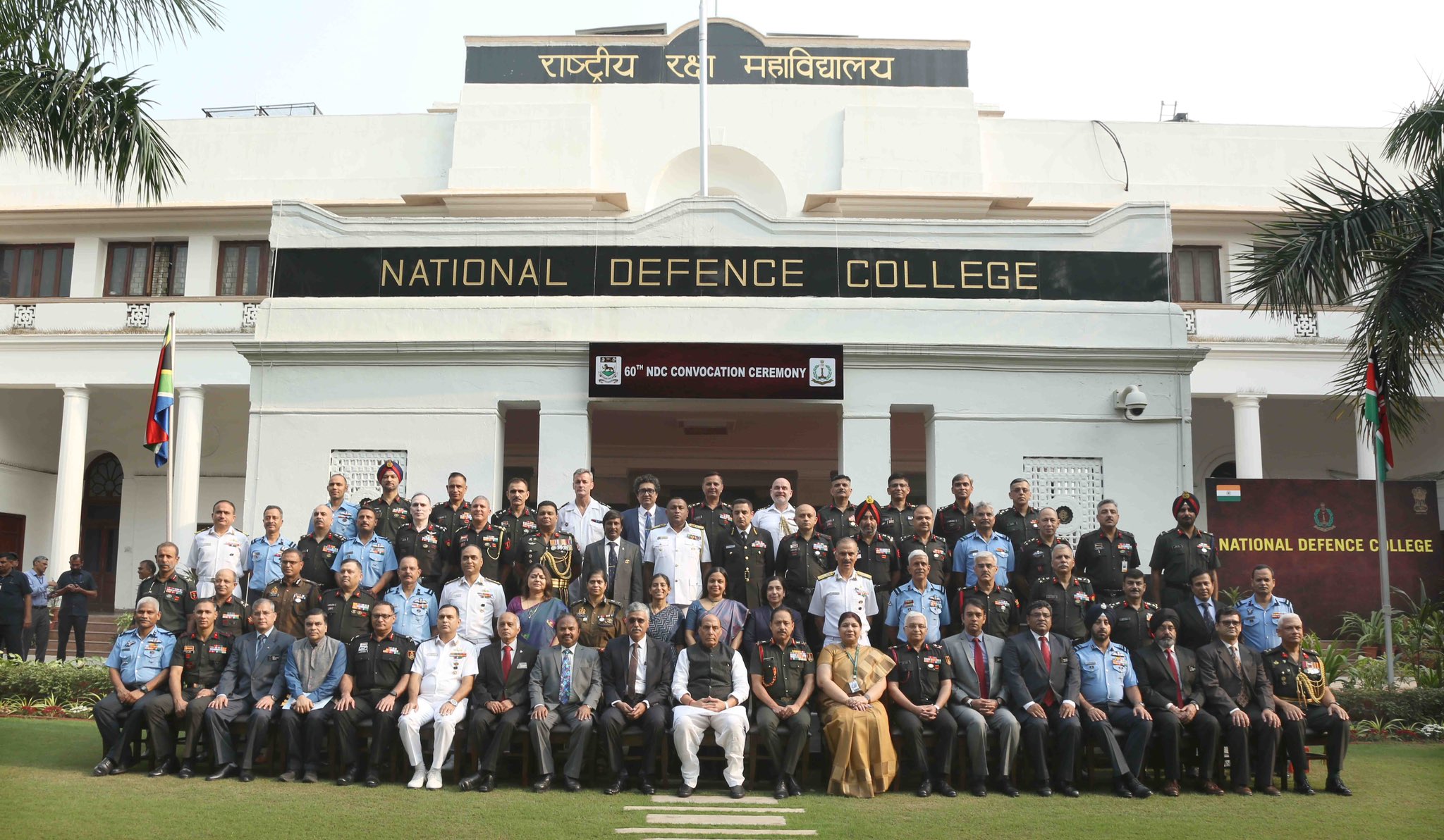 In his address, Commandant NDC, Lt Gen MK Mago stated that the officers of the 60th NDC course would be able to apply a transdisciplinary and out-of-the-box approach to national issues at the strategic level, both in policy formulation and execution. He highlighted NDC’s vibrant academic environment, which in addition to fulfilling its mandate, has inspired many course participants to pursue PhDs/original research in Defence Studies.

Defence Secretary Shri Giridhar Aramane, Vice Chancellor, University of Madras Prof (Dr) S Gowri and other distinguished guests were present on the occasion. The NDC was established in 1960. Considered the highest school of strategic learning in the country, it is a premiere Inter-Services academic institution under Ministry of Defence, responsible for training & grooming of senior officers (of Brigadier equivalent rank) of the Indian Armed Forces, Civil Services as well as from friendly foreign countries.