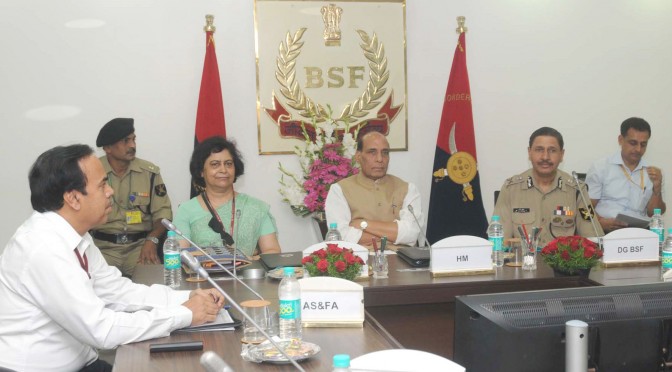 The Union Home Minister, Shri Rajnath Singh said that security is the first and foremost requirement for development. Therefore our borders should always be safe and secure. The Home Minister accompanied by senior Officers of the Ministry of Home Affairs visited the Border Security Force Headquarters here today. He was received by Shri D K Pathak, Director General, Border Security Force and accorded a Guard of Honour.

Shri Rajnath Singh was given a detailed presentation by Inspector General (Operations) on border management, operations, internal security, personnel and administrations of the Force. The Home Minister was appraised about the duties of BSF in different parts of the country, Border Management and Left Wing Extremism Operations (LWE Ops).

During the presentation, Inspector General (Operations) also deliberated upon the various achievements of the Force, which included various operational success in Anti Naxal Operations, raising of new reserve battalions in a phased manner, achievement in land acquisition, training, sports and in health & medical aspects of the Force personnel.

While addressing, Shri Rajnath Singh said that the Government will leave no stone unturned to safeguard our borders & address all important issues related to border security. He also praised the Border Security Force that has always played a vital role in safeguarding borders and its performance which has been outstanding and excellent. He lauded the contribution of the BSF in Border, Internal Security, Anti Naxal Operations and rescue operational duties and expressed that the Ministry of Home Affairs is already in the process to sort out all the issues of functional requirements of the Force. Shri Rajnath Singh also inspired the Officers and Jawans of the Force to give their best in the security of the Nation and to carry out their duties with full dedication and devotion.