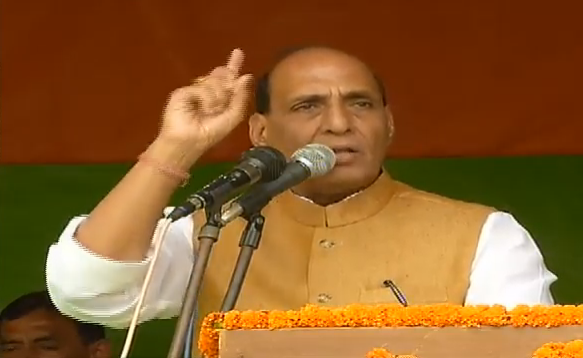 Union Home Minister Shri Rajnath Singh today reviewed the facilities granted to minority communities from the neighbouring countries. He also discussed the status of grant of Long Term Visa (LTV) and citizenship and other measures taken to streamline the process during the last two years.

The present Government has taken a number of steps to address the problem being faced by minority communities in neighbouring countries who have come to India due to religious persecution in their country.

The Ministry of Home Affairs has already extended the following facilities to Minority Communities :

• To submit the application for registration as citizen of India in the Offline mode by those who are not able to file applications in the Online mode .

• Permission to submit an affidavit in lieu of the Renunciation Certificate for citizenship.

• The grant of initial LTV for a period of five years at a time, instead of one year.

• Children of such Pakistan nationals on LTV allowed to take admission in schools/ colleges/ Universities/ technical and professional institutions under foreigner quota without permission from the State Government/UT Administration.

• State Governments/ UT Administration empowered to grant permission to such Pakistan nationals to engage themselves in employment of purely private nature.

• State Govts. /UT Administration delegated powers for services like grant of visit to additional places, grant of No Objection to Return to India (NORI) and grant of permission to change in mode of travel and port of exit.

The MHA also organized 26 Special Camps at district level in the States of Gujarat, Madhya Pradesh, Rajasthan, Uttar Pradesh, Karnataka, Mahashtra, Andhra Pradesh, Haryana and NCT of Delhi in 2015. During these camps, 2307 applications for LTV and 1994 applications for citizenship were received. The concerned State Governments have been advised to process these applications on priority basis.

The Union Home Minister has directed the officers to conduct more special camps in coming months and to ensure that in all pending cases, LTV and citizenship are granted before 15th August, 2016. Many more facilities to be given to these minority communities such as opening of Bank Accounts, purchase of dwelling units for self occupation and self employment , issuing of driving licence, PAN card, Aadhar card and reduction of fees for registration as citizens of India are under active consideration of the Government.