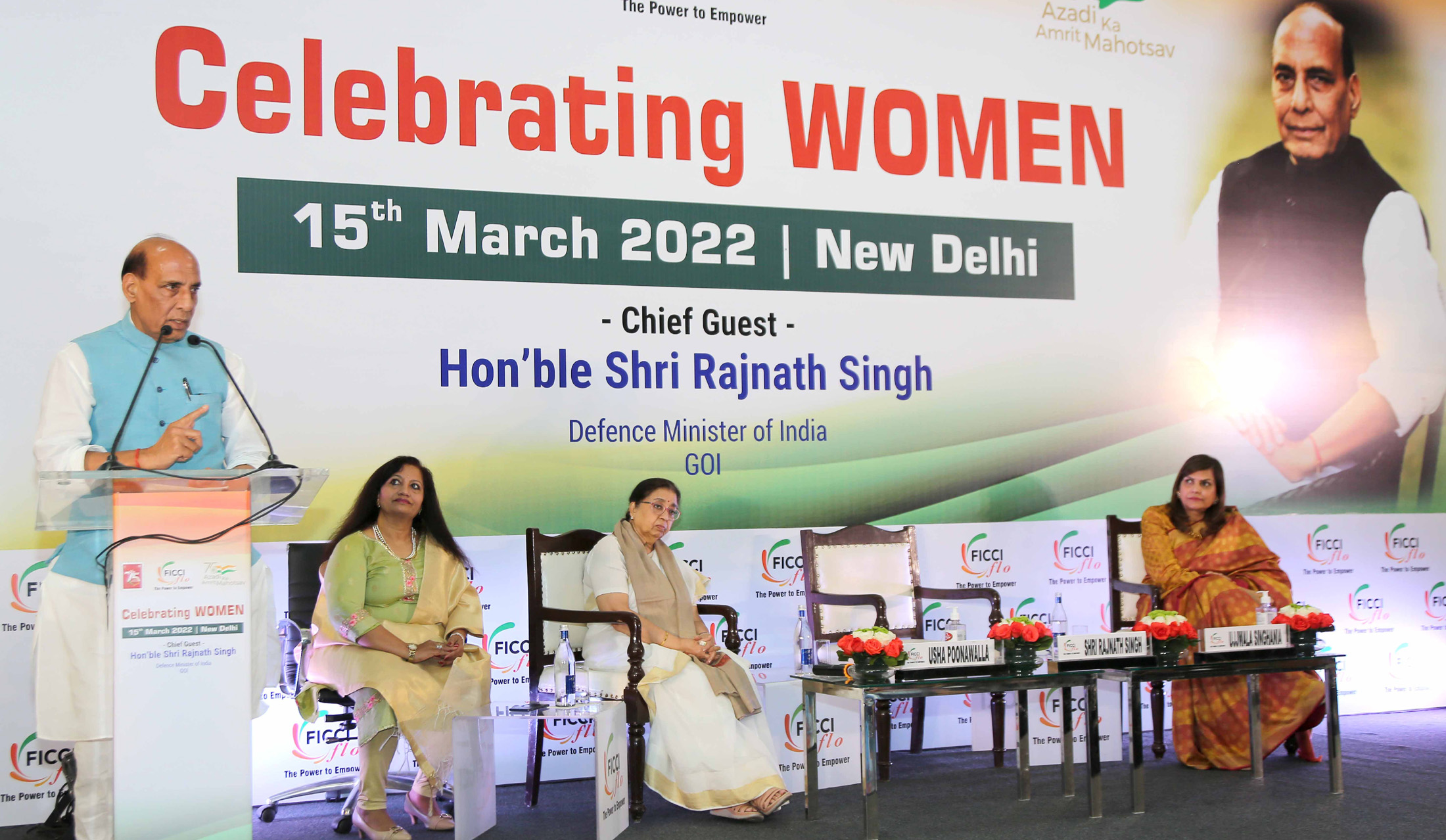 “Armed Forces will see a larger participation of women in the coming years due to the recent steps taken by the Government,” said Raksha Mantri Shri Rajnath Singh while delivering the keynote address at an event organised by FICCI Ladies Organisation (FLO) in New Delhi on March 15, 2022. “Today, women are not only working in the Army in every wing, but now we are also giving permanent commission to them. Today, admission is being given to boys as well as girls in every Sainik School. The doors of NDA have also been opened for women. About two lakh women took the entrance exam last year with great enthusiasm. The percentage of women in the Indian Army will increase significantly in the coming times,” said Shri Rajnath Singh.

The event ‘Celebrating Women’, on the theme ‘Women Transforming India’ was organised as part of ‘Azadi ka Amrit Mahotsav’ being celebrated across the country to commemorate 75 years of Independence.The Raksha Mantri lauded the FLO for organising the event which symbolises a ‘New India’ where men & women are making equal contribution in the overall development of the Nation. He pointed out the equal respect given to women in India since the Vedic times, stressing that women play a crucial role in the upliftment of society.He said, the Government considers women as building blocks of the future and no stone is being left unturned to ensure their multi-layered development across the country.

Shri Rajnath Singh asserted that a number of schemes dedicated to skill development, employment and entrepreneurship have been rolled out by the Government, under the leadership by Prime Minister Shri Narendra Modi. He said, these schemes have paved way for the holistic development of women and given them confidence to forge a new identity. “Women are now playing an active role in all spheres of life, including education, health, industry, trade, defence and sports,” he added.

The Raksha Mantri also made special mention of 23-year-old Ms Vinita Singh who left a salary package of Rs one crore and launched her own startup, which has now become a Rs 300 crore company. He said, this inspiring story has been made possible due to the policy brought out by the Government to promote startups in the country. “In 2014, only 500 startups were working in the country. By 2022, this count has crossed 60,000,” he added.

Shri Rajnath Singh expressed confidence that women will play a major role in making India one of the top three economies in the world in the times to come. He called upon the women of the country to come forward and work shoulder-to-shoulder in the development of India. He exuded confidence that they will be equal partners in building a strong, prosperous and self-reliant India as envisioned by Prime Minister Shri Narendra Modi.

The Raksha Mantri also welcomed the judgement of the Karnataka High Court on the Hijab issue. He said,the dress code of schools/colleges must be followed by everyone of every religion.

On the occasion, rich tributes were paid to the Armed Forces personnel who made the supreme sacrifice to safeguard the sovereignty and integrity of the Nation. Rich tributes were also paid to Bharat Ratna Late Lata Mangeshkar. Her sister Ms Usha Mangeshkar received an award on behalf of Late Lata ji. The Raksha Mantri remembered the Nightingale of India, saying that she will always be alive in the heart of every Indian. President, FLO Ms Ujjwala Singhania and other members of FLO were also present.