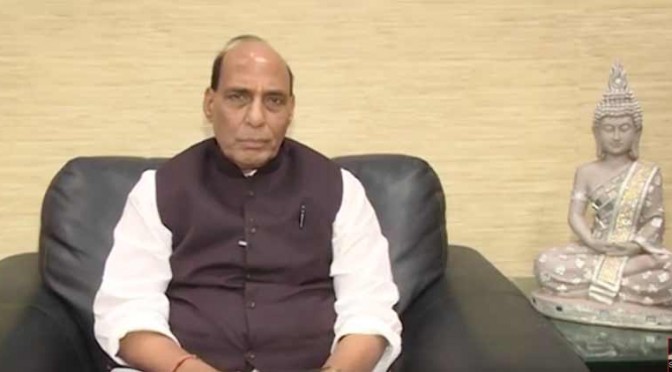 Government sensitive to the problems of Crimes against Women and Children: Shri Rajnath Singh

Government sensitive to the problems of Crimes against Women and Children: Shri Rajnath Singh

In his message on the occasion, the Union Home Minister said the present Government is sensitive to the problems of Crimes against Women and Children and has strengthened legal and institutional infrastructure to deal with the menace. He said that the Criminal Law (Amendment) Act, 2013 has been a landmark legislation which enhanced the punishment for various crimes against women. Besides, the police officers and medical officers can also be prosecuted if found wanting in discharging their responsibilities in specific cases against women, he added.

Shri Rajnath Singh said the Ministry of Home Affairs (MHA) has already initiated steps for setting up the Nationwide Emergency Response System (NERS) and having ‘112’as the emergency number which can be dialed from anywhere in the country by anyone to seek police assistance. He said that timely and hassle free registration of crime is equally important and the MHA is going to provide the facility to the people through citizen portal which is under development as part of Crime and Criminal Tracking Network & System (CCTNS) project. This will create a facility for people to report a crime and also track the follow up action taken by the appropriate agencies, he added.

The Union Home Minister said a decision has been taken to assist the States to set up dedicated Investigative Units to tackle crime against women in about 564 districts in the country. These units will be specialized in nature having 1/3rd women investigators and will be funded by the Centre and States on 50:50 sharing basis, he added.

Underlining the importance of rehabilitation of the victims, Shri Rajnath Singh said a Central Victim Compensation Fund has been set up to support the States, under which acid attack victims will be given additional compensation up to Rs 5 lakhs for treatment purpose. He said that the MHA is working in partnership with the insurance companies and Health Ministry to develop a cashless treatment scheme for victims of acid attack.

Pointing out that a large number of Women and Children are victims of human trafficking, Shri Rajnath Singh said an in-principle decision has been taken to set up an organized Crime Investigating Agency for which inter-ministerial consultations have been initiated. He said that the MHA, in close coordination with the State Governments, took up two specific campaigns ‘Operation Smile’ during January 2015 and ‘Operation Muskan’ during July 2015 to rescue missing children and reunite them with their parents. Both the campaign resulted in rescue of more than 28,000 missing children. All the States have been requested to take up ‘Operation Smile-II’ during January 2016, he added.

During the inauguration, a coffee table book titled ‘Tis Hazari Nama’ showcasing the journey of Delhi Bar Association since its inception, was presented to Shri Rajnath Singh.