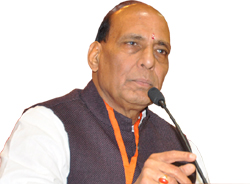 Shri Pathak informed that one BSF jawan was killed in the unprovoked and premeditated Pak firing. He further said that the BSF retaliated effectively and three Pak Rangers were reportedly killed and some others injured.

Shri Pathak informed that the firing stopped in the evening at the request of Pak Rangers for ceasefire by showing the white flag. He further said that the firing has stopped since then and the situation is totally under control.

The Union Home Minister asked the DG, BSF to provide a suitable and appropriate reply for any such unprovoked firin