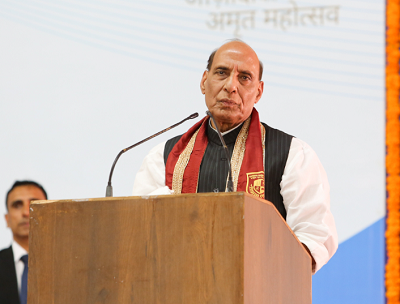 India has emerged as a self-assured and self-reliant nation which believes in working together for the collective well-being, but rejects interference in its internal matters. This was stated by Raksha Mantri Shri Rajnath Singh at an event in New Delhi on December 09, 2022. He credited the diplomacy, credibility and leadership qualities of Prime Minister Shri Narendra Modi which have transformed India’s image on the international stage to an agenda-setter. “India has today positioned itself on global high-table. Our peace-loving nature & self-respect being recognised and respected by the world, he said.

Referring to ‘Operation Ganga’ which was launched to evacuate over 22,500 Indians from conflict-hit Ukraine, Shri Rajnath Singh said, it was made possible after the Prime Minister spoke with the Presidents of Russia, Ukraine and US. He termed it as a testament to the credibility and acceptance of Shri Narendra Modi all over the world as a global leader.

Commending the Prime Minister’s vision for the welfare of the nation, the Raksha Mantri asserted that, under Shri Narendra Modi’s leadership, India has become the fifth largest economy with a GDP of USD 3.5 trillion in the last 8.5 years. “Before 2014, India was among the ‘Fragile Five’ nations, a word coined investment firm Morgan Stanley. Today, we have moved out of that category and joined the ‘Fabulous Five’ economies of the world. According to a recently published article on the global economic outlook by Managing Director of Morgan Stanley Shri Chetan Ahya, India will be the third largest economy after the US and China by 2027. India’s GDP will increase to USD 8.5 trillion in the next ten years. This clearly shows that India has become a centre of hope and confidence for the world,” he said.

Shri Rajnath Singh added that due to the Government’s efforts to realise the vision of ‘Aatmanirbhar Bharat’, India has joined the mainstream of manufacturing and is now producing indigenous aircraft carriers such as INS Vikrant. He said, the Government’s focus is on increasing the participation of the private sector for their as well as the nation’s growth while inviting foreign companies to ‘Make in India, Make for the World’. He stated that issuance of positive indigenisation lists of over 3,700 items including components/Line Replacement Units for DPSUs and 310 other defence related items have been issued by Ministry of Defence to promote self-reliance. He added that due to the Government’s efforts, defence exports have now crossed Rs 14,000 crore, as compared to Rs 900 crore in 2014. He exuded confidence that “by 2023, defence exports will cross Rs 19,000 crore and we are well on course to achieve the target of Rs 25,000 crore worth of exports by 2025.”

The Raksha Mantri added that today India has hope, stability of policy and quality of leadership. He spoke about the appreciation extended by various countries and organisations on India’s management during COVID-19 pandemic. He said, during the pandemic, India not only manufactured masks, PPE kits and set up testing labs to cater to local needs, but also helped many countries. “We also supplied Covid vaccines to about 100 countries. Providing more than two billion 19 crore vaccine doses till date is a big achievement of our vaccination programme,” he said.

On India’s G-20 Presidency, Shri Rajnath Singh stated that inspired by the spirit of Vasudhaiva Kutumbakam and global welfare, the Prime Minister has decided to share, through the events, India’s resolve of development of countries which have not yet recovered from COVID-19. The theme of these G-20 events is ‘One Earth, One Family, One Future’ through which an inclusive and decisive roadmap of development will be prepared.

The Raksha Mantri also listed out a number of procedural and structural reforms undertaken by the Government in the last 8.5 years to strengthen the physical as well as digital infrastructure of the country. These include Pradhan Mantri Jan Dhan Yojana, Direct Benefit Transfer, National Infrastructure Pipeline and Goods & Services Tax (GST). He pointed out that a dynamic start-up ecosystem has been created in the country, in line with the Prime Minister’s vision of ‘Aatmanirbhar Bharat’. The number of registered start-ups in the country has seen a massive jump from just 400-500 in 2014 to over 80,000 in 2022. Over 100 have become unicorns, he said.

Shri Rajnath Singh added that due to the country’s strong economic condition, there has been a record Foreign Direct Investment (FDI) despite the COVID-19. He said, 2021-22 recorded the highest ever FDI at $83.6 billion. He exuded confidence that India will become one of the most powerful nations in the times to come,” he said.