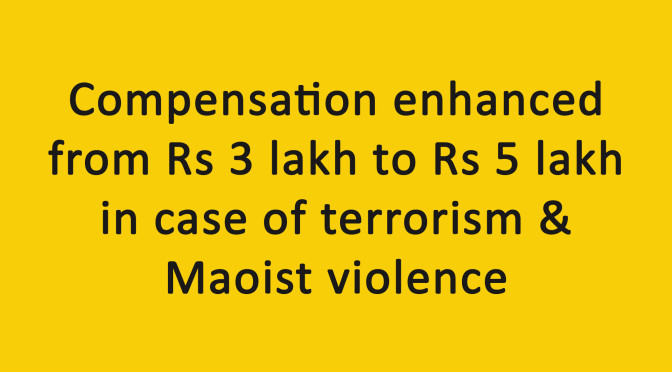 The Union Home Minister Shri Rajnath Singh has approved that the civilian victims of cross border firing along the border will be given a compensation of Rs 5 lakh. The compensation given to those who die due to terrorism or Maoist violence has also been increased from Rs 3 lakh to Rs 5 lakh.

Any civilian who dies anywhere in the country due to terror attack, Naxal violence, firing from across the border, shelling or IED explosion, will be given Rs 5 lakh as compensation uniformly. The amount will be given to the next of kin of the victim. An amount of Rs 5 lakh will also be given to those who receive 50 per cent or more disability or incapacitation due to the same reasons. The compensation amount will be given subject to the condition that no employment has been provided to any of the family members of the victims by the government.