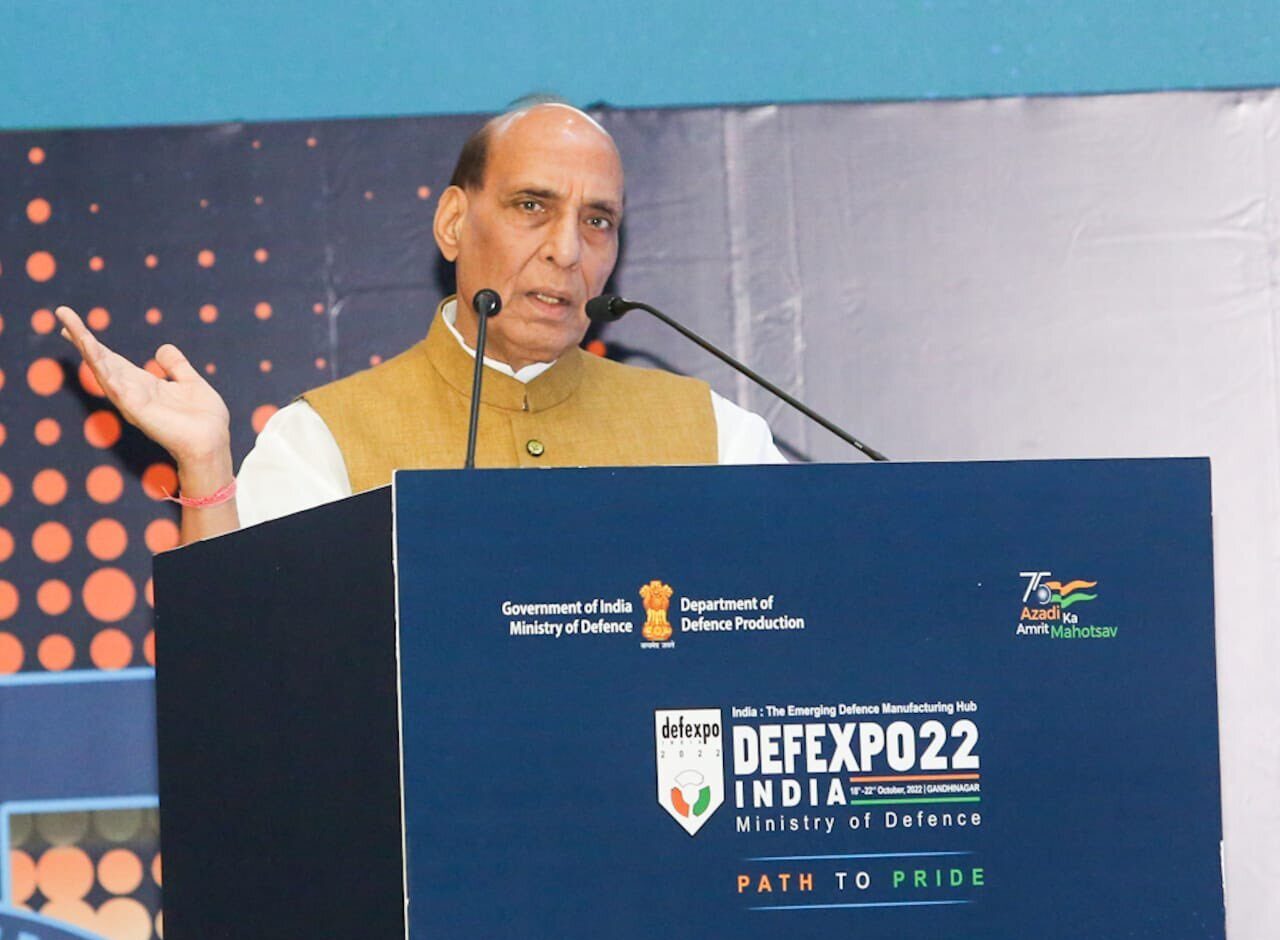 Raksha Mantri Shri Rajnath Singh has exhorted startups and innovators to come up with new ideas to modernise the Armed Forces through research & innovation and contribute in making the nation strong, prosperous & ‘Aatmanirbhar Bharat’ as envisioned by Prime Minister Shri Narendra Modi. Inaugurating Manthan 2022, an event organised by Innovations for Defence Excellence-Defence Innovation Organisation (iDEX-DIO), Ministry of Defence as part of 12th DefExpo, Shri Rajnath Singh said, a large number of startups and innovators are venturing into the defence sector as the Government has created a robust ecosystem for their as well as the nation’s growth.

The Raksha Mantri stated that more than Rs 300 crore have been approved for over 100 iDEX winners to develop products/technologies in more than 50 technological areas, stressing that the iDEX initiative has changed the perception that defence production is only for big businesses and industrialists. “In the last 7-8 years, there has been a change in the consciousness of the nation, with greater focus on solutions and goals. Earlier, it was difficult for the youth to contribute in various fields, but initiatives such as iDEX have empowered our young entrepreneurs and given them wings to fly. iDEX, a major iniative towards making India self-reliant, is a platform to provide economic support to entrepreneurs to develop state-of-the-art technologies,” he said.

Shri Rajnath Singh lauded iDEX for winning the Prime Minister’s Award for Excellence in Public Administration last year and achieving new heights of success since its launch by the Prime Minister during DefExpo 2018. He added that iDEX is a popular initiative of the Ministry of Defence and has encouraged other ministries to adopt innovative schemes. Calling iDEX ‘innovation for innovation’, Shri Rajnath Singh emphasised that it has encouraged the entrepreneurial potential of the country, which was not able to emerge previously due to policy restrictions. He added that the initiative has helped aspiring start-ups and innovators to come forward and work with other stakeholders in the defence sector. Terming iDEX a movement to work for the nation, Shri Rajnath Singh said, the combined efforts of the government and innovators have created a positive ripple effect in the economy.

Elaborating further, the Raksha Mantri stated that iDEX creates direct and indirect employment opportunities and is useful for both job seekers and job creators. He highlighted that since the inception of iDEX, over 6,000 applications have been received in the last seven editions of Defence India Start-up Challenge and Open Challenge. He also shed light on iDEX Prime which was launched to provide Grant-in-Aid support worth up to Rs 10 crore.

On the growth of iDEX, Shri Rajnath Singh said that the platform now has a presence in Tier-II and Tier-III cities and is connecting with incubators across India. He called for focussing on the twin principles of disperse more and gather more to further expand the reach of the initiative to different parts of the country, with the aim to connect with more young ignited minds. He exuded confidence that iDEX will show the way forward for innovation in untouched areas and help in all-round development of the defence sector.

Manthan 2022 was aimed at bringing together start-ups, corporates, and military representatives, to ascertain the indigenous innovations leading the Indian defence sector into a bright future. It provided a unique opportunity for innovators associated with iDEX-DIO to showcase their capabilities, products and state-of-the-art technologies to the target audience of the industry leaders. During the event, it was highlighted that the results for 75 challenges under DISC 7 (SPRINT) and PRIME (SPRINT) were announced in a record time of under two months; 118 winners across 75 challenges were announced by iDEX – DIO. The winners of DISC 6, DISC 7 SPRINT, OC 4 & OC 5 were felicitated.

The event also featured a panel discussion with industry stalwarts, and the leaders from Ministry of Defence and Armed Forces on the trending topic – ‘Harnessing Start-up Innovation in India for Space Technologies’. A static exhibition of a large array of start-ups supported by iDEX-DIO was displayed to the attendees.