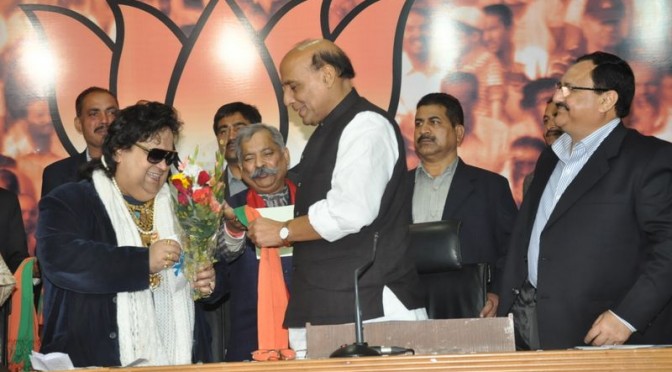 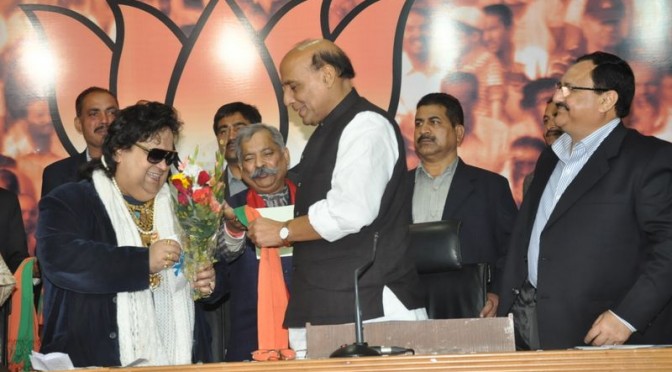 Veteran Hindi music director of ‘Disco Dancer’ fame, Bappi Lahiri, and a few other film and TV personalities joined BJP today in the presence of party president Rajnath Singh here. Lahiri, the flamboyant music director known for wearing heavy gold ornaments, cheered for BJP’s Prime Ministerial candidate Narendra Modi and insisted there is a wave in favour of the right-wing party ahead of the Lok Sabha elections.
Incidentally, Lahiri had campaigned for Congress in 2004. Breaking into a song, Lahiri said, “Rajnathji’s dream will come true. Modi will create some magic.” He also paid respect to BJP veteran leaders Atal Bihari Vajpayee, L K Advani and party’s founders Shyama Prasad Mookerjee and Deen Dayal Upadhyaya. When asked why he has joined BJP when he had campaigned for Congress in the past, Lahiri said, “Ten years back, there was a wave in their (Congress) favour. The wave has now changed. The wave is now here.”

The BJP president said it will soon be decided what role Lahiri will play in the party and whether he will contest the polls. He, however, mentioned that Lahiri is from West Bengal- perhaps an indication that his services may be used in the state where BJP hardly has a political presence. Others who joined the party are Tuhin Sinha who wrote TV serial ‘Yeh Rista Kya Kehlata Hai’ and co-authored former party president Nitin Gadkari’s book ‘India Aspires’, Prashant Narayan who acted in ‘Murder-2′, TV actress Ashima Sharma who is also a former president of Jodhpur University Students Union, Sachindra Sharma, writer of children series ‘My Friend Ganesha’, TV actor Gaurav Chopra and script-writer Rajiv Dhamija.