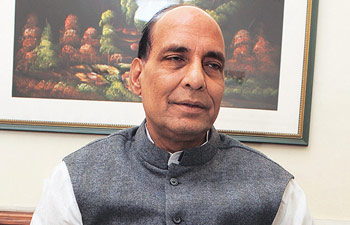 The Annual Conference of State Minorities Commissions began here today. Inaugurating the Conference, Shri Rajnath Singh, the Union Home Minister said that the Government is committed to instill a sense of security among minorities as a sense of insecurity among them is the greatest challenge before any Government. Elaborating on India‘s uniqueness of being the only country where all the religions of the world are found and practiced, the Minister emphasized that peaceful existence rests on twin support of justice and humanity. He urged the conference to debate the disturbing issues with open mind and suggest practical ways for harmonious coexistence. He assured all possible help on his part. Dr Jitendra Singh, Union Minister of State (Independent Charge) for Development of North Eastern Region (DoNER), MoS in PMO, Personnel, Public Grievances and Pensions, Space and Atomic Energy said that India;s democracy provides the weakest citizen a chance not only to survive but thrive irrespective of caste creed or religion. Dr. Najma Heptulla, the Union Minister for Minority Affairs said that religions may be many but faith is one. Among practioners of various religions, mutual respect and understanding are of utmost importance for growth and development of all and resultant development of the Nation. Shri Mukhtar Abbas Naqvi, the Minister of State for Minority Affairs assured to take the development to the last member of the minority society.

The one day Conference focusing on Development of Minorities will have two Technical sessions besides inaugural, and Valedictory. In session one on “Capacity building of Minority Educational Institutions in India” Prof.Talat Ahmad, Vice Chancellor Jamia Milia Islamia will deliver the keynote address. Session two on “Corporate Social Responsibility and Development of Minorities in India” will be addressed by Shri S S Mundra, Deputy Governor, Reserve Bank of India.