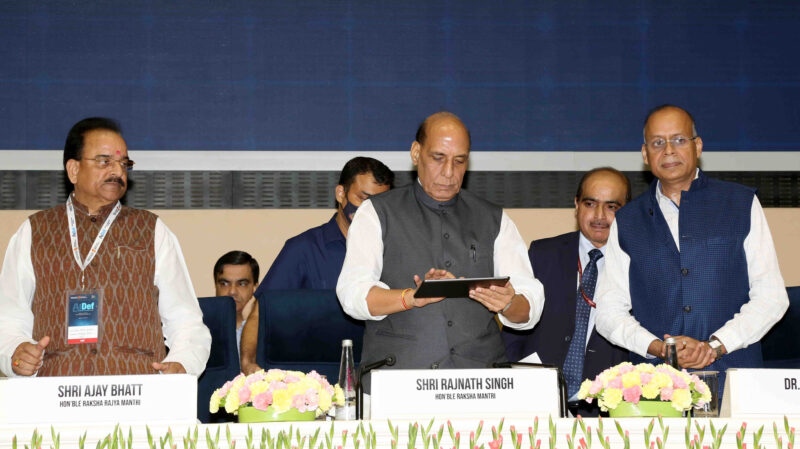 AI should only be used for development & peace of humanity: Shri Rajnath Singh

The Raksha Mantri released the physical as well as e-version of the book comprising the details of these 75 products, showcasing the collective efforts put on by the Services, Defence Research & Development Organisation (DRDO), Defence Public Sector Undertakings (DPSUs), iDEX start-ups and the private industry in last four years in the field of AI. Appreciating the efforts, Shri Rajnath Singh, in his address, described AI as a revolutionary step in the development of humanity; a proof that a human being is the most evolved creature in the universe. He was amazed that a human mind has not only created/reproduced knowledge, but is developing intelligence that creates knowledge.

Shri Rajnath Singh pointed out that AI has built inroads in almost every sector, including defence, health & medicine, agriculture, trade & commerce and transport. He called upon all the defence stakeholders to enhance the jointness of human consciousness and the ability of AI to bring a radical change in the sector. “When there has been full human participation in wars, new autonomous weapons/systems have been developed with the help of AI applications. They can destroy enemy establishments without human control. AI-enabled military devices are capable of handling large amounts of data efficiently. It is also proving to be very helpful in training the soldiers. In the coming times, Augmented and Virtual Reality technologies will also be used effectively,” he said.

The Raksha Mantri appreciated the fact that MoD, Armed Forces, DRDO, DPSUs and the Industry are making meaningful efforts to provide innovative & indigenous AI solutions for defence and are developing futuristic technologies. He echoed Prime Minister Shri Narendra Modi’s vision of developing AI-enabled and AI-led applications to ensure social welfare & national security and making India a ‘Global Hub for AI’. He hoped that India will soon be among the leading countries in the field of AI.

Shri Rajnath Singh asserted that weapons/systems are being developed, keeping in mind the crucial role AIcan play in future warfare. “We have started incorporation of AI applications in remote piloted, unmanned aerial vehicles etc. There is a need to move further in this direction so that we can develop autonomous weapon systems. Timely infusion of technologies like AI & Big Data in the defence sector is of utmost importance, so that we are not left behind the technological curve and are able to take maximum advantage of technology for our services,” he said.

The Raksha Mantri added that several MoUs have been signed with the industry for faster promotion of AI applications in the Services. Many AI-related challenges under the Innovations for Defence Excellence (iDEX) initiatives have also been given. The challenges are under various domains, including Radio Frequency Spectrum Management, Underwater Domain Awareness, Satellite Image Analysis and Friend or Foe Identification System. He urged the industry and start-ups to explore newer avenues and work hand-in-hand with the Government to ensure complete self-reliance in the field of AI technology.

“Russia is a technologically advanced country and is continuously progressing in the field of Science & Technology. On AI, Russian President Mr Vladimir Putin had said ‘Whoever becomes the leader in this sphere will become the ruler of the world’. Although India believes in the principle of ‘Vasudhaiva Kutumbakam’ (the whole world is one family) and has no intention to rule the world, we must develop the capability of our AI technology so that no country can even think of ruling us,” said Shri Rajnath Singh.

Impressing upon the important role academia can play in strengthening the defence sector, the Raksha Mantri stated that MoD research platforms, DRDO and DPSUs are providing support to various institutes in pursuing cutting edge AI research. He added that efforts are being made by DRDO to make strides in the field of AI through Technological Development Fund projects and ‘Dare to dream’ contests. Several Defence-Industry-Academia Centres of Excellence have been established across the country and AI finds prominence in the charters of many of them, he said.

“Our country is full of scientific & technologically trained youth who have innovative minds and the desire to contribute to Nation Building. In such a situation, we will move towards fulfilling the technological needs of our nation as well as the world in the times to come. Although the mandate of the organisations of MoD is to develop futuristic technologies for the Armed Forces, its spin-off benefits will also be available to the civilians,” said Shri Rajnath Singh.

The Raksha Mantri emphasised on the need to think about humanity and world peace along with one’s own defence & security. “There is a need to think about the ethics of AI and its potential dangers at an early stage. Whenever a new technology is introduced, it takes time for the society to adapt to it. In this transition period, a challenging situation sometimes arises. Since AI is a technology that brings about a massive change, we have to be prepared in advance for any legal, ethical, political and economic challenges. We should look at the future of AI with a positive attitude, but remain prepared as well. We have to use this technology for the welfare, development and peace of humanity. We must work towards ensuring its democratic use,” he said.

Delivering the welcome address, Defence Secretary Dr Ajay Kumar emphasised on the need to encourage the use of AI in defence, reiterating the commitment of MoD to make all efforts in this direction to ensure that the Armed Forces are equipped with state-of-the-art technology. He stated that a task force was established in 2018 for strategic integration of AI in defence and had submitted its recommendations within three months. These recommendations were implemented through the Defence AI Council, headed by the Raksha Mantri. Dr Ajay Kumar lauded the proactive efforts of the three Services, DRDO, DPSUs & the Industry in developing these 75 products and contributing to strengthen national security. He added that over 100 more projects are in various levels of development.

In consonance with the vision of MoD to achieve defence exports of Rs 35,000 crore by 2025 and provide boost to the domestic industry, ‘Raksha Niryat Ratna’ awards were conferred on Bharat Electronics Limited from the public sector and on Indo-MIM from the private sector for achieving highest defence exports in recent years.

Top three students of ‘GenNext AI’ Solutions Competition, which was organised to get bright innovative ideas on futuristic AI solutions, were also felicitated by the Raksha Mantri. To stimulate new ideas in the field of AI in Defence, three panel discussions were also organised with active participation from the Services, academia, students, research organisations and industry. An exhibition was also organised which provided a unique opportunity for innovators to display their capabilities, products and state-of-the-art technologies.