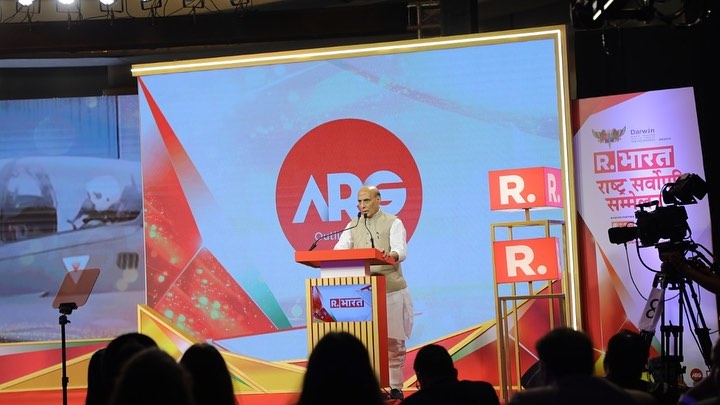 Aatmanirbhar Bharat Abhiyan’ is making India one of the strongest countries in the world: Shri Rajnath Singh

Prime Minister Shri Narendra Modi’s vision of ‘Aatmanirbhar Bharat’ is making India one of the strongest and most respected countries in the world. This was stated by Raksha Mantri Shri Rajnath Singh at an event in New Delhi on September 16, 2022. He asserted that the Government is leaving no stone unturned to realise the dream of a ‘New India’ which is not dependent on any country to fulfill its needs, especially those related to security.

Elaborating on a number of steps taken by Ministry of Defence to achieve ‘Aatmanirbharta’ in defence, Shri Rajnath Singh said, the issuance of three positive indigenisation lists of 310 items as well as encouraging the private sector to become a part of the nation’s growth story is testament to the Government’s unwavering commitment to provide the Armed Forces with indigenously developed state-of-the-art weapons/platforms and equip them to deal with all future challenges. He added that the domestic industry has the capacity and capability to manufacture the latest defence platforms in water, land, sky & space in the next few years and the Government is making all efforts to provide them with the necessary environment.

Throwing light on the progress achieved due to the Government’s efforts, the Raksha Mantri said, defence exports, which were once Rs 1,900 crore, have now crossed Rs 13,000 crore. He exuded confidence of achieving the target of Rs 1.75 lakh crore of defence production by 2025, which includes export of Rs 35,000 crore. He made special mention of the country’s first indigenous aircraft carrier INS Vikrant, with 76% indigenous content, which was commissioned by the Prime Minister on September 02, 2022 in Kochi. He termed it as an important milestone in India’s path to achieve self-reliance.

Shri Rajnath Singh, however, made it clear that ‘Aatmanirbharta’ does not mean isolation. He defined it as India’s resolve to give hope and relief to the whole world. “Today, the world has realised that manufacturing hub should not be in any one country. In the changed circumstances, big MNCs are exploring new options to decentralise its manufacturing. India not only fulfils that quest, but also gives hope that this manufacturing shift has the potential to provide a new lift to the entire global economy. India is the centre of global optimism. We have an ocean of opportunities, plethora of options and a feeling of openness. ‘Aatmanirbhar Bharat’ opens new doors with an open mind. Our aim is to safeguard national interests and, at the same time, help our friendly countries to achieve their goals. The vision is clear – ‘Make in India, Make for the World’,” he said.

The Raksha Mantri remembered former Prime Minister late Atal Bihari Vajpayee, under whose leadership India started to become a strong economy once again after independence, adding that the present government is taking forward his vision of ‘Nation First’. “It was under the leadership of Atal ji that the country came back on the growth trajectory. He focused on infrastructure development & welfare of the poor; controlled inflation and brought the growth rate of the economy to beyond 8 per cent. Now, under the leadership of our current Prime Minister Shri Narendra Modi, India has become the world’s 5th largest economy. In the last eight years, procedural as well as structural reforms have been undertaken. Outdated laws have been replaced and a conducive environment has been created for investment in the country.  Along with ‘Ease of Doing Business’, our focus is on enhancing the ‘Ease of Living’ in the country, under which basic facilities are being provided to every citizen,” he said.

Shri Rajnath Singh lauded the timely and bold decisions taken by Prime Minister Shri Narendra Modi which, he said, have transformed India’s image in the world from a silent observer to an assertor and provider. “During the COVID-19 pandemic, we carried out the largest ever vaccination drive. We not only protected our citizens, but extended help to other countries. COVID vaccines, medicines and other essential items were supplied to about 100 countries. During the initial phase of the Russia-Ukraine conflict, our Prime Minister spoke with Presidents of US, Russia & Ukraine and through ‘Operation Ganga’ we managed to rescue around 22,500 Indian nationals from the war zone. It reflected India’s diplomacy, credibility and the quality of the leadership,” he said.

The Raksha Mantri termed unity and patriotism among the people as one of the main reasons behind the fast-paced development being witnessed in the country. He appealed to the people to keep the nation at the centre of their hearts and minds while working in their respective fields, describing it as the only way to take the country to greater heights.