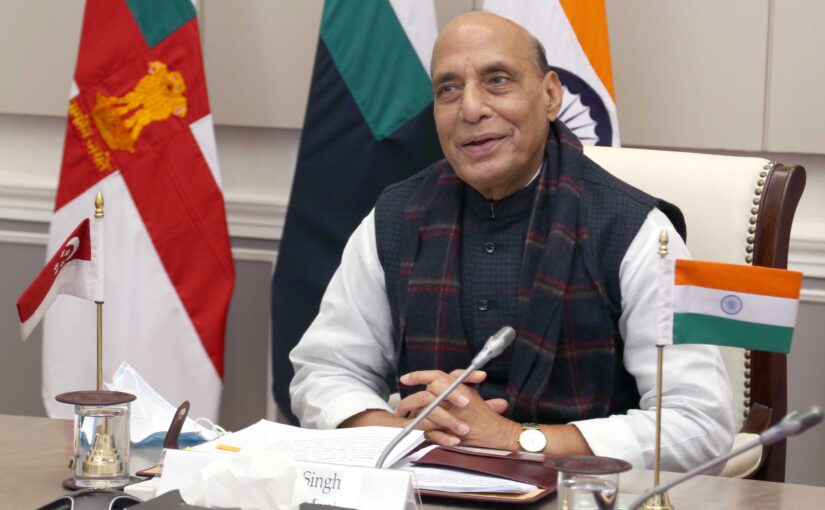 Raksha Mantri Shri Rajnath Singh co-chaired the 5th India-Singapore Defence Ministers Dialogue along with Dr. Ng Eng Hen, Minister for Defence, Republic of Singapore on 20 January 2021. During their virtual interaction, both Ministers expressed satisfaction at the progress of ongoing defence cooperation engagements between the two countries despite limitations imposed by ongoing COVID 19 pandemic.

During the virtual interaction, Raksha Mantri conveyed his compliments on effectiveness of pandemic mitigation measures implemented in Singapore and the contribution of Singapore Armed Forces in restricting the spread of COVID-19. He also highlighted the role of our Armed Forces in combating COVID-19 and various missions undertaken to assist in repatriation of Indians stranded overseas. Dr. Ng Eng Hen, Minister for Defence, Singapore, reciprocated the compliments and exchanged views on the role of Armed Forces in the whole of Government’s approach towards control of the pandemic.

Both Ministers also expressed satisfaction at the growing defence ties between the two countries. Both sides reviewed the progress of various bilateral defence cooperation initiatives being pursued over the last year and expressed commitment to further elevate the scale of engagements between the Armed Forces as well as in areas of defence technology and industry. During the dialogue both Ministers discussed new areas of potential cooperation and articulated their vision in this direction. The Ministers witnessed the Signing of the Implementing Agreement on Submarine Rescue Support and Cooperation signed between the Indian Navy and Republic of Singapore Navy.

Defence Secretary Dr. Ajay Kumar was present during the meeting.

Had a productive meeting with Singapore’s Defence Minster, Dr. Ng Eng Hen. India is fortunate to a have defence partner like Singapore.
Today’s interaction will benefit both countries on many bilateral issues that are being pursued to further strengthen our special relationship.