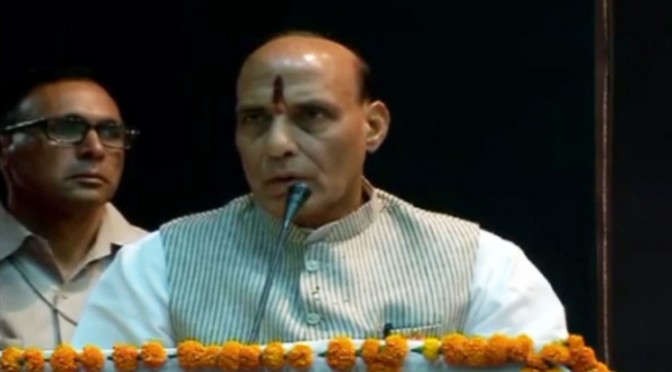 Consultative Committee of Ministry of Home Affairs meets in Goa

The Union Home Minister, Shri Rajnath Singh has said that 34 more Coastal Police Stations will be operationalised shortly in seven coastal states and Union Territories including Goa, West Bengal, Lakshdweep, Karnataka, Maharashtra, Puducherry and Andaman and Nicobar Islands. He was addressing the Consultative Committee Meeting of the Ministry of Home Affairs today at Panaji in Goa, which discussed in detail the Maritime Security issues including coastal, offshore and high seas.

The Union Home Minister said that coastal security is an important feature in India’s security planning and the coasts have defined our geographical boundaries for centuries. The vulnerability of our coastline came to the fore in 1993 when explosives used in Mumbai serial blasts were smuggled through sea route, he added. Shri Rajnath Singh said that when terrorists trained by Pakistan reached Mumbai in 2008 to launch an attack, they took the sea route and the Centre has taken several steps since then to secure our coastline. India’s coastline is 7,516 kms long and several important cities and strategic installations are located on its coast, he added.

Shri Rajnath Singh said that our Coastal Security network is a three tier system involving the Indian Navy, Coast Guard and Marine Police and we have achieved better coordination among the security agencies. Shri Rajnath Singh said as a part of strengthening Indian Coast Guard, two new Regional Headquarters have been established at Gandhinagar and Kolkata besides three new district headquarters at Port Blair, Puducherry and Kavaratti. The Director General, Coast Guard has been designated as Commander of Coastal Command and the Coast Guard has made Standard Operating Procedures (SOPs) in consultation with all stakeholders for better coordination among agencies. Based on these SOPs, several joint exercises have been carried out in all coastal states and UTs. He added that the Ministry of Home Affairs has also laid down a detailed SOP on functioning of Coastal Police Stations in the country.

Deliberating on Coastal Security initiatives, Shri Rajnath Singh said, for a better coordination between the Centre and State Agencies for Coastal Security, the National Committee on Strengthening Maritime and Coastal Security will review timely implementation of various proposals and other important matters pertaining to maritime and coastal security. He expressed a need for effective coordination amongst various Central Ministries and Agencies and the coastal State Governments and Union Territories.

All the members made valuable suggestions on the subject and the Union Home Minister assured that their suggestions have been noted and will be implemented after examination in the Ministry of Home Affairs.