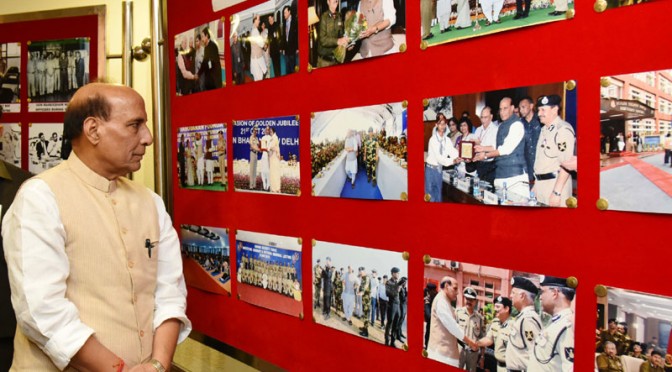 Delivering his key note address on “Challenges of Border Management in current security scenario”, Shri Rajnath Singh said that the Border Security Force is our front line of defence. There are different forces at the border and through their co-ordination, different challenges for effective Border Management are dealt by the authorities. Shri Rajnath Singh said that the proxy war in the present time is a great challenge and the Government is taking all necessary steps to effectively guard the borders. Smuggling of animals at the border has been brought down with the help of concerned State Governments and the co-ordination of the residents in the border areas with our security forces.

The Union Home Minister mentioned that the Government is committed to incorporate technical upgradation in the border management and train our manpower for effective management of the borders. Shri Rajnath Singh said that the safety and security of the border provides safe environment for development which is an important requirement for the economic growth.

The Union Home Minister paid rich tribute to late Shri K.F.Rustamji whose pioneering efforts were instrumental in the raising and growth of the Border Security Force. He said that the contribution of Shri Rustamji is a source of inspiration for all of us.

During the Investiture Ceremony, a magazine “Prahari Sangini’ was also unveiled by the Union Home Minister and a short documentary ‘BSF- India’s First Line of Defence’ was also screened.

Earlier, Director General of Border Security Force Shri K.K.Sharma delivered his welcome address. Recalling the journey of the BSF since its inception, he stated that BSF has successfully faced several challenges and crises over the years. The world’s largest Border Guarding Force enjoys an excellent track record and is ready to face any challenges that come its way. BSF remains in constant endeavor of preparing itself in terms of strategy, infrastructure, weaponry and training, stated the DG.

Senior officers from MHA, Directors General and Senior Officers of other Central Armed Police Forces (CAPFs), BSF officers and men, Retired officers of the BSF and families of the force members were present on the occasion.