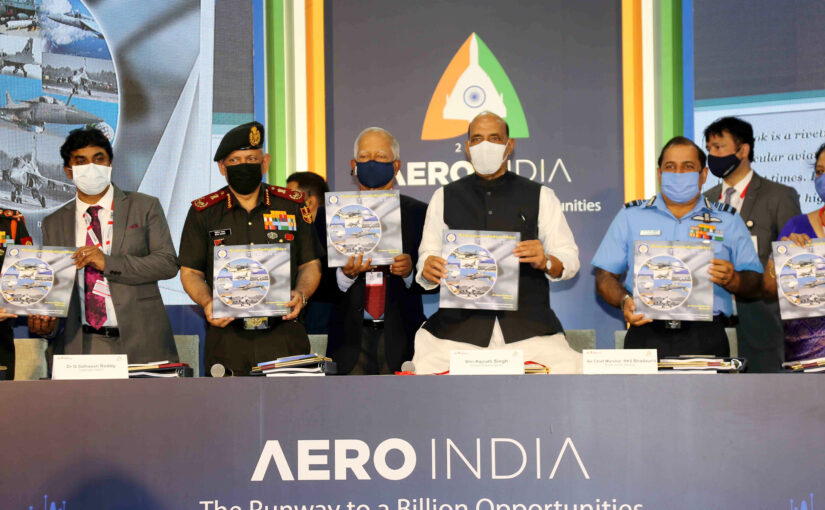 Raksha Mantri Shri Rajnath Singh released the Export Compendium of Defence Research and Development Organisation  (DRDO) which consists of defence systems and platforms, which can be exported to friendly countries at Aero-India 2021 on the inaugural day.

A major revision of Design, Development & Production of Military Airborne Stores (DDPMAS) document has also been released. DDPMAS document is followed by the aeronautics fraternity for design, development, production and certification of airborne systems. The new airworthiness framework emphasizes on Atma Nirbhar Bharat for self-reliance, empowering the organisations and industries with liberal certification procedures. The document released by the certification agency CEMILAC would enable Defence PSUs, MSMEs and R&D Establishments to develop and deliver world class products to our Defence Services.

Commemorating the golden jubilee of the Aeronautical Research & Development Board (AR&DB), RM released a Stamp and a book on the journey of AR&DB’s contributions to the field of aeronautics. The book highlights the major achievements of AR&DB since its formation. The AR&DB was constituted by DRDO in 1971 to promote research and take India towards self-reliance in aeronautics.

Addressing the scientists, aerospace professionals and industrialists present at the function, Raksha Mantri complimented DRDO for multiple initiatives undertaken to enhance the technological capabilities of the Indian industry and playing a significant role in making the country Atma Nirbhar in the area of defence manufacturing. He said that technologies being developed by DRDO are continuously transferred to industries, making them confident to produce indigenous defence systems. He further said that release of the golden jubilee stamp of ADR&DB shows the long R&D path travelled by DRDO in partnership with Indian academia in the area of aeronautics. He also said that export compendium released today will further enhance the strategic partnership with friendly countries and make India a major player in the global defence market.

Aero India, the country’s biennial air show started on 3rd of February, 2021 at Yelahanka Bengaluru. In sync with the Atma Nirbhar Bharat theme of this year’s Aero India, DRDO is participating with more than 300 products, technologies, innovations in the indoor pavilion, outdoor, static and flying displays during the show. More than thirty laboratories of DRDO connected with aeronautical technology development are exhibiting their products and technological achievements in the mega event this year.