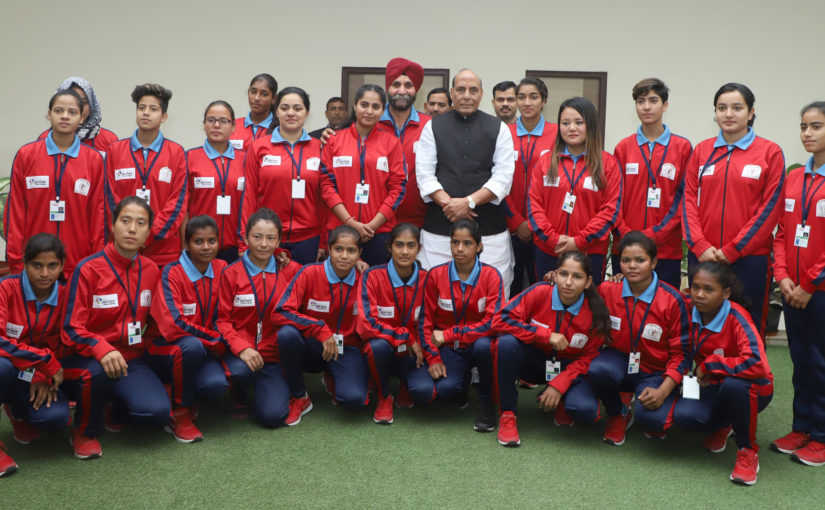 Of the 22 Girls, 11 are from J&K, – five from Kashmir Valley, four from Jammu region and two from Ladakh. Interacting with the Union Home Minister, the Girls drew his attention to the need for creating better sports infrastructure and facilities and providing more opportunities to fulfill the aspirations of the youth from the State.

Shri Rajnath Singh pointed out that an additional provision of Rs.100 crores has been specially made for upgradation of Sports facilities in the State.

Met the young and energetic girls of J&K’s first ever women football team. They are highly motivated & driven when it comes to football. Playing the role of new age ‘Gender Benders’ these girls are setting an example for others to follow. I wish them success and a great future. pic.twitter.com/3ZlMwhzkXm

In a prompt gesture, the Union Home Minister spoke on the phone instantly with the State Chief Minister Ms. Mehbooba Mufti, conveying the concerns of the young players be promptly taken up for redressal.

Coach Satpal Singh said the J&K Sports Council has set up State Football Academies in as many as 19 of 22 total districts in the State. The J&K CM’s XI team comprises 11 Girls from other parts of the country including six from Haryana, three from Odisha, and one each from Bihar and Jharkhand. The induction of outside talent raises standards to enable the team come up to the national level, said team Manager Tsering Angmo.

Captain of CM’s-XI team, Afshan Ashiq said the youth is talented, there is only the need for a platform. For Afshan, who hails from Srinagar, her life and career made a remarkable U-turn since the days when her picture splashed in the national media as a stone pelter.

Her tender hands once hurled stones, but now as the team’s goalkeeper standing firmly at her goalpost, the same hands have warded off many a hard kick.

“I don’t want to look back; my life has changed forever, I want to be an achiever and do something proud for the State and the nation,” said Afshan, whose life story might soon hit the silver screen with a renowned Bollywood filmmaker planning to launch a biopic on her life.