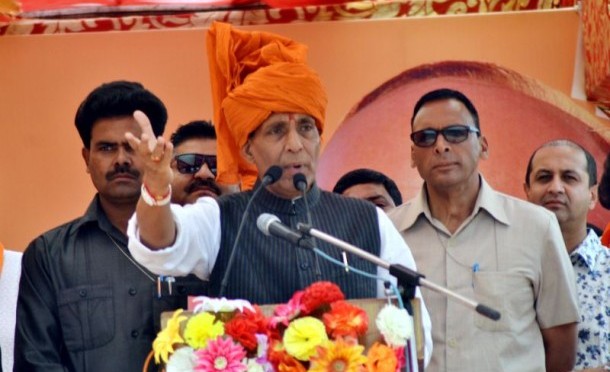 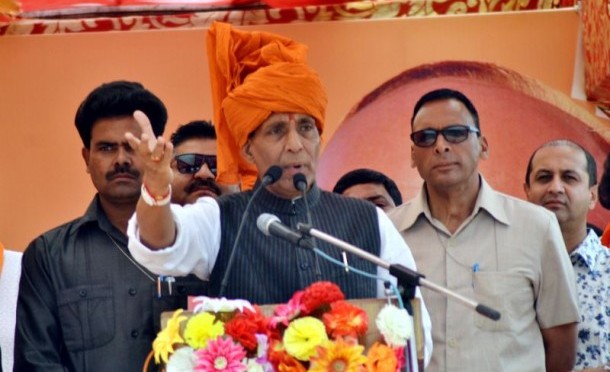 BJP chief says the party will give a ‘befitting reply’ to any neighbouring country which tries to intimidate India Attacking the incumbent Manmohan Singh government over signing a Border Defence Cooperation Agreement with China, Bharatiya Janata Party (BJP) president Rajnath Singh on Tuesday said if voted to power, his party would review the agreement and asserted they would give a “befitting reply” to any neighbouring country which tries to intimidate India along the border. “Soldiers from Pakistan and China cross over this side repeatedly. But our Prime Minister Manmohan Singh went to Beijing in October 2013 and entered into an agreement with them that if Chinese Army enters, then Indian army will not drive it out, instead will request Chinese troops to return back with hands folded,” Singh told a public rally in Udhampur. “What has happened to our prime minister? Those who should’ve given confidence, do this! As regard to this agreement, when we will come (to power), we will review it (Border Defence Cooperation Agreement),” he said. But BJP seeks to have a congenial relationship with countries including China and Pakistan. “But if our neighbour does not desist from its acts, or tries to tease us repeatedly, we will tolerate it to a limit and if it continues with its design, we will not desist from giving a befitting reply,” he added. In October 2013, India and China had signed a Border Defence Cooperation Agreement to maintain peace along Line of Actual Control (LAC). With the signing of the agreement, both the countries reached a comprehensive agreement to avoid border tensions and army face-offs along the LAC by deciding that neither side will use military capability to attack the other nor tail patrols along the border. In a scathing attack on Congress-led United Progressive Alliance (UPA) government over killing of Indian soldiers on the border and repeated attacks by Pakistani troops, Singh said, “Pakistani soldiers repeatedly intrude into our territory and they attack our jawans. Even then our government sits silent.” “I want to question PM, Sonia Gandhi and Rahul, what sin have Indian soldiers done? Do you think our Jawans are weak. Just give free hand to Indian Army and then see—no country can dare to see toward us with any ill-design,” he added. (Source:PTI)