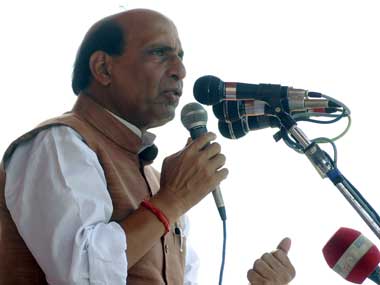 Will force UK to term Bhagat Singh as ‘martyr’, not ‘terrorist’: BJP

Reacting sharply to a UK based researcher’s recent remark calling Bhagat Singh a ‘terrorist’, BJP today said it would pressurize the European country to regard him as a martyr. “I remembered Bhagat Singh when I came here today. It pains us when he was called a terrorist in England,” BJP chief Rajnath Singh said, addressing a Fateh (victory) rally here. When the NDA comes to power, it will pressurise the UK government to change the history books where Bhagat Singh is termed a terrorist and make it ‘martyr’, he said. The NDA will bring a resolution to this effect in the Parliamnet, he said.

Hitting out at Congress vice-president Rahul Gandhi, the BJP leader said, “He (Rahul) wants a strong mechanism for tackling corruption. What was he doing for last nine and half years when his government was in power? Corruption cannot end till Congress is there.” Taking a dig at Congress over not naming of Prime Ministerial candidate, he said the party was mum whenever it was asked about the matter. “Our PM candidate (Narendra Modi) is wonderful, but they have no answer on this,” he said.

Lauding Punjab Chief Minister Parkash Singh Badal for developmental works in Punjab, Singh said Badal was the first leader who urged him to nominate Gujarat Chief Minister Narendra Modi as the Prime Ministerial candidate of the party. “First of all, it was Prakash Badal of the Akali Party who told me that Modi should be the PM candidate,” he said.

On farmers, Singh said a separate Agriculture budget was necessary like the Railway budget as 65 per cent of the country’s population was involved in farming. Singh said once NDA came to power, farmers’ income insurance scheme will be started, and recalled a similar scheme started in 2004 by them, but was stopped by Congress which came to power then. “The day our farmer will be happy the entire nation will be happy,” he said.