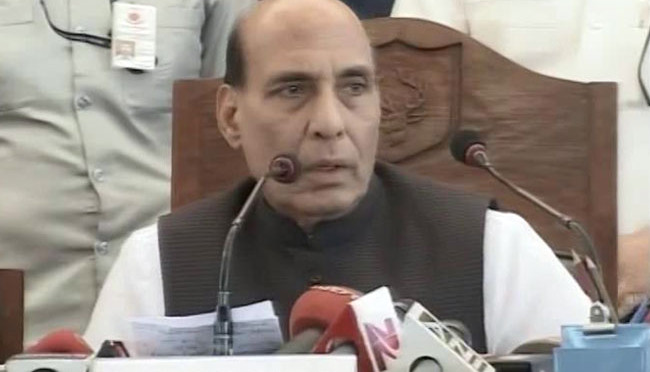 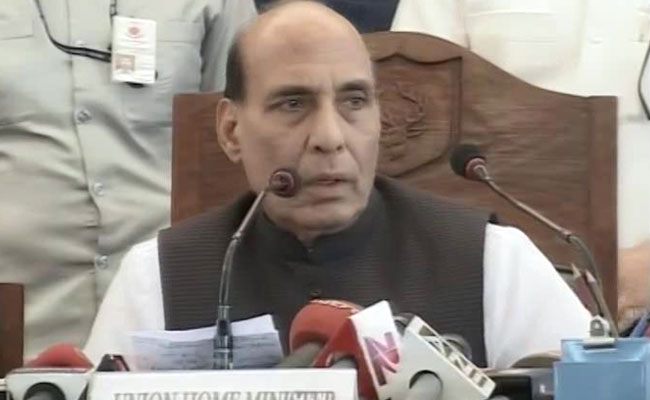 Home Minister Rajnath Singh on Sunday took a dig at Pakistan and said that after talking to Jammu and Kashmir Chief Minister Mehbooba Mufti, they had decided that they did not need interference from a third party to restore peace in the Valley.

Attacking Pakistan on its role in Kashmir, he said, “its role has not been ‘paak‘ (pure) on Kashmir. Pakistan should change its attitude and approach towards Kashmir.”

“We do not need any third party to improve ties with Kashmir,” said Rajnath Singh at a press conference in Srinagar. “We want to tell our neighbouring country that even they are suffering from terrorism. On the other hand, the neighbouring country tells the youth of Kashmir to pick up arms,” he further said.

The Home Minister also said that the central government and Prime Minister Narendra Modi were very concerned about the situation in Kashmir.

“We want to make it clear that the government does not only want to have a relationship based on needs with Kashmir but an emotional bond,” Singh said.

“I have appealed to the people (of Kashmir) to restore peace and harmony,” he said, adding that he condemned the killing of innocent people during the protests in Kashmir.

The Home Minister also said that he had met more than 30 delegations in Kashmir over the last two days. “I returned from Anantnag after speaking to the people there… We will welcome any constructive suggestions to bring about peace in Jammu and Kashmir,” he said.

“I have told the Kashmir CM that she can send the injured to Delhi if required. We will treat them in Aiims and will take the injured on a special flight if required,” he said, adding that six people were already admitted in Aiims.

Appealing to the youth to not to resort to stone-pelting, Singh said he has asked the security forces to refrain from using pellet guns as much as possible even as he regretted the loss of lives. He added that the government will form a panel to study non-lethal weapons to control mobs.

Singh also said that he had told the health minister to send a nodal officer of the ministry to Jammu and Kashmir for the injured. He also asked the media to help in restoring peace in the Valley.

“I ask the press to cooperate with us in restoring peace in Jammu and Kashmir,” he said. “I want to reiterate: if anyone has any grievances, they can only be addressed through dialogue.”

Jammu and Kashmir Chief Minister Mehbooba Mufti along with several ministers of her government on Sunday met Rajnath Singh who is on a two-day visit to the Valley to take stock of the situation.