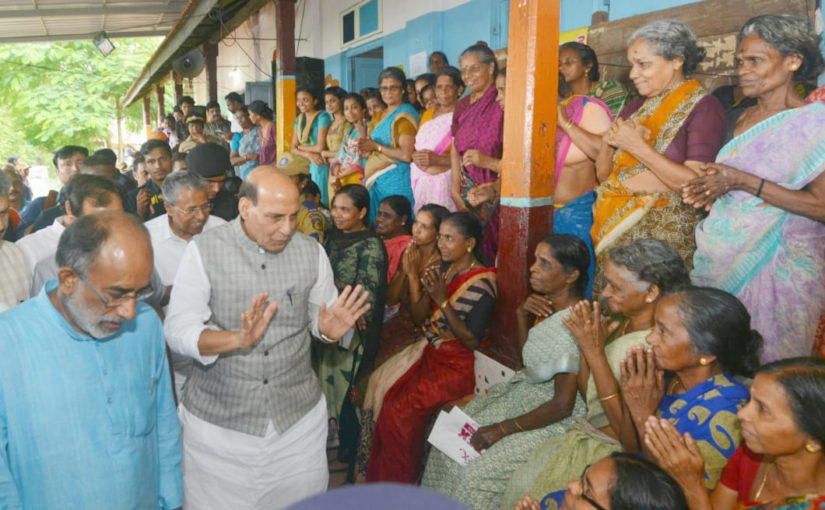 Shri Rajnath Singh also carried out aerial survey of the affected areas of Adimali, Aluva and ParavurTaluk as well as the Cheruthoni-Idukki dam and immediate areas downstream and reviewed the search, rescue and relief measures taken by the State Government and other Central Government agencies with the Chief Minister Shri Pinarayi Vijayan, Ministers of the State Government, Chief Secretary, Director General of Police and other senior officers of the Central Agencies and State administration.

The Ministers also visited relief camp and met the affected people living in the relief camps. Based on aerial survey, field visit and interaction with the affected people, Shri Rajnath Singh expressed his satisfaction on the arrangements made by the State administration in managing the unprecedented floods/landslides in the State and in providing basic amenities, including food, water and medical service etc. in the rescue and relief camps.

He also informed that based on the Memorandum received from the State Government, an Inter-Ministerial Centre Team (IMCT) has already been deputed and is currently visiting the affected areas in the State for assessment of losses and the Government of India will consider providing additional relief from NDRF as per norms on priority.

Briefing the media Shri Rajnath Singh expressed concern over the loss of human lives and damage caused to the crop. He assured that the Central Government will continue to provide all possible assistance to the State Government to cope with the flood situation.

During the current South-West monsoon season, various parts of the State of Kerala have been affected by heavy rains/rain oriented calamities of varying degrees. 14 teams of NDRF consisting of 404 rescuers and 31 boats are already deployed in the worst affected districts viz. Thrissur, Ernakkulam, Kozhikode, Idukki, Wayanad and Alapuzha to assist the State administration in the relief and rescue operation as well as distribution of essential relief material and to provide medical support to affected people at the time of emergency.

In addition to adequate number of column of Army, Navy and Coast Guard, helicopters of Indian Air Force, Navy & Coast Guard are also deployed in the State for assisting State administration in lifting and dropping of essential commodities.