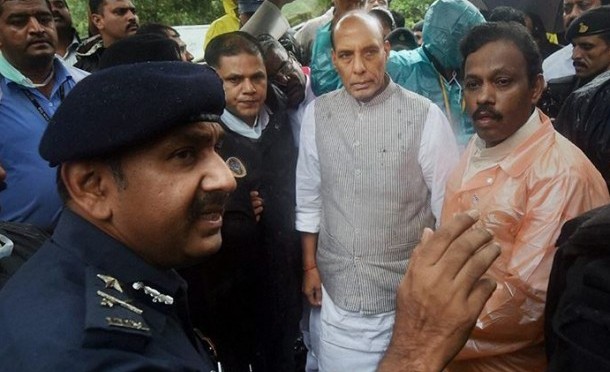 Union Home Minister Rajnath Singh Thursday assured full central assistance to Maharashtra in dealing with the devastating landslide at Malin village near here in which 30 people have been killed.

Singh, who visited the mishap site, announced an assistance of Rs 2 lakh each to the kin of the victims from the Prime Minister’s fund.

“About 45 houses, including a temple, are flattened under the impact of the landslide. I express my condolences to the bereaved families on behalf of the Centre. The Prime Minister has also assured all possible assistance to the state government in dealing with the natural calamity,” he said.

It will be premature to talk about reasons behind the landslide until an inquiry is conducted into the mishap, Singh said replying to a query.

Meanwhile, the death toll in the landslide has risen to 30 with two more bodies being extricated by National Disaster Response Force jawans from under debris of the landslide that buried half of the Malin village, NDRF and district officials said.

The eight injured persons rescued from the debris were being treated at nearby hospitals, they said.

Rescue operations were on despite rain and difficulties caused by marshy land and the slush, they added.

The Home Minister also hailed the rescue efforts launched by NDRF jawans and state government agencies, saying they reached the difficult terrain within three hours after the mishap that occurred last morning.

Nearly 150 people were still feared to be trapped under the huge mound of mud-and-rock debris in the village, located at the foot of a hill in Ambegaon taluka, about 120 kms from the district headquarters here in western Maharashtra.