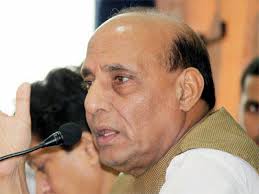 The Home Minister’s Office confirmed the news on Twitter.

Singh will be briefed in detail by Central Reserve Police Force officials about the current security situation, Left wing extremism theatre and position of forces in various states affected by Naxal violence. This will be the first visit of the new Home Minister to a paramilitary force headquarters after Singh recently visited the headquarters of the Delhi Police, a force under the command of the Home Ministry. The top brass of CRPF, led by Director General Dilip Trivedi, would also brief the Home Minister about the technology-based updates that the about three lakh personnel strong force has made in the recent past. “This visit is an introductory one. The Home Minister will take stock of the operational preparedness of the force during the visit,” sources said. The CRPF, which is the lead force for conducting anti-Naxal operations in the country with close to 90,000 troops deployed for the task, will also brief the Home Minister about the troop strengths and current security situation in Jammu and Kashmir and the North East. The force officials, sources said, would also brief the Home Minister about the immediate and long-term requirements of the force in terms of weaponry and other allowances required for troops working in these difficult areas. Arrangements have also been made for Singh to interact with a group of jawans and officers during his visit. (With PTI inputs)