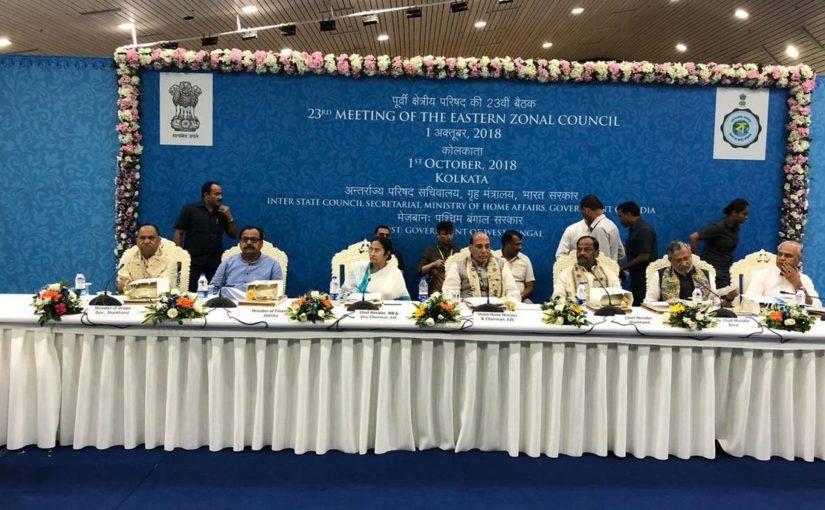 The 23rd meeting of the Eastern Zonal Council was held at Kolkata today under the Chairmanship of the Union Home Minister Shri Rajnath Singh. The meeting was attended by the Chief Ministers of West Bengal, Jharkhand, Deputy Chief Minister of Bihar, and Ministers from the States of the Council including Odisha as well as senior officers from Central and State Governments.

In his opening remarks the Union Home Minister emphasized that it has been the endeavour of the present Government to strengthen the institution of the Zonal Councils as well as the Inter State Council in order to promote and maintain a good federal atmosphere of cooperation among the States and between the Centre and the States as well. As a result, in the last 4 years, 13 Zonal Council meetings and 15 Standing Committee meetings have been held. In these meetings, about 700 issues had been discussed, out of which about 450 were resolved.

The Council reviewed progress of unresolved items of the last meeting relating to Phulbari Dam under the Agreement of 1978 between Bihar and West Bengal, release of central share under post-matric and pre-matric scholarship schemes for SCs/STs/OBCs, scheme for modernization of state police forces, allocation of land for National Institute of Pharmaceutical Education and Research at Kolkata and Hajipur, maternal and child nutrition through Integrated Food Fortification Project, measures for bringing green revolution to Eastern India, issues relating to mining and coal mining in States of the Eastern Zone, issues arising out of the bifurcation of Bihar and Jharkhand, measures to curb Left Wing Extremism, rail movement for socio-economic development of the Eastern zone, railway electrification, construction of dedicated freight corridor, road over bridges and road under bridges in lieu of level crossings, waiver of condition of advance payment for Central Armed Police Forces deployment by Ministry of Home Affairs, release of balance funds to Bihar under Backward Region Grant Fund.

The Council also took up 15 new issues which are – development of allocated coal mines, implementation of various National Programs of Health, establishment of shelters for urban homeless under DAY-National Urban Livelihood Mission, expeditious clearance for right of way for laying optical fibre cable, teachers education, land acquisition for development of 11 airports in these States, implementation of provisions of the Panchayats (Extension to the Scheduled Areas) Act, 1996, Statistical Strengthening Scheme, doing away with the systems of affidavits and attestation of certificates by gazette officers and by allowing self-attestation, compliance of the Guidelines for Indian Government Websites, e-Office, e-Governance and Nodal Officer of public grievances portal. Out of the total 30 items discussed today 26 were resolved in the meeting.

Prior to this meeting, the Standing Committee of the Council met on 21.12.2017 in which 7 items including curbing of drugs trafficking in these States, issues relating to fisheries, productivity of livestock & poultry, model flood code for chronically flood affected areas, communal situation in these States, installation of Doppler radar at Ranchi, implementation of recommendations of 14th Finance Commission, rationalization of funding pattern under centrally sponsored schemes.

The five Zonal Councils (Western, Eastern, Northern, Southern and Central) were set up under the States Reorganization Act, 1956 to foster Inter-State co-operation and co-ordination among the States. They are mandated to discuss and make recommendations on any matter of common interest in the field of economic and social planning, border disputes, linguistic minorities or inter-state transport etc. They are regional fora of cooperative endeavor for States linked with each other economically, politically and culturally. Being compact high level bodies, specially meant for looking after the interests of respective Zones, they are capable of focusing attention on specific issues taking into account regional factors, while keeping the national perspective in view.

The deliberations of the Council were held in a warm and cordial atmosphere in the true spirit of cooperative federalism and ended with the decision to host the next meeting in Bihar.