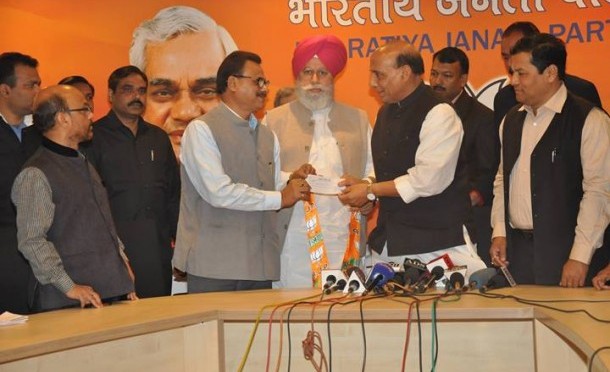 In a shot in the arm for BJP, two senior leaders of the Asom Gana Parishad on Monday joined the party and the GJM pledged support to BJP candidates in West Bengal, including the Darjeeling Lok Sabha seat.

Former AGP president Chandra Mohan Patowary and senior AGP leader and former minister Hitendra Nath Goswami joined the BJP along with a large number of their supporters here and were welcomed by BJP President Rajnath Singh.

In another development, Gorkha Janmukti Morcha (GJM) president Bimal Gurung announced that his outfit will extend support to the BJP in West Bengal.

GJM president Bimal Gurung wrote in his Facebook page, “After meeting BJP President, Shri Rajnath Singh, the Gorkha Mukti Morcha has decided to extend full support to candidates fielded by BJP all over India and Darjeeling. I would appeal all Gorkhas to support BJP all over India. The name of the candidate for Darjeeling will be announced after BJP releases it’s election manifesto 2014.”

BJP president Rajnath Singh wrote in Twitter, “Gorkha Janamukthi Morcha (GJM) president Shri Bimal Gurung has decided to support the BJP in coming Lok Sabha polls. I welcome his decision.” Gurung feels GJM’s support will be the deciding factor not only in Darjeeling but also for Jalpaiguri and Alipurduar Constituency.