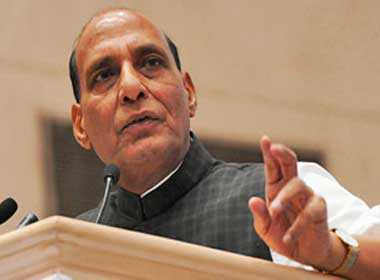 Bharatiya Janata Party (BJP) president Rajnath Singh is confident that the lotus will bloom in Kerala in the coming Lok Sabha polls. The party has identified the seats where it has a good chance of winning, he said, though declined to name the seats.

Singh shared his thoughts with Malayala Manorama while he was in Thiruvananthapuram to attend BJP Prime Ministerial candidate Narendra Modi’s rally.

How would the BJP face the challenge posed by the Aam Aadmi Party (AAP)?

We view the formation of new political forces in a democracy as a natural process. But the AAP’s decision to form the government in Delhi with the backing of Congress shocked the BJP. (Arvind) Kerjriwal, who had reiterated many times that he wouldn’t form a government with the backing of the Congress or the BJP, did a volte-face to form the government. Never thought there was such a yawning gap between words and deeds of the leadership of political parties. People are closely watching the actions of political parties. (The) AAP is facing a crisis of reliability.

What is your take on the formation of a Third Front?

Third Front is an experiment which has failed repeatedly. People do not want an unstable government at the Centre.

What is the basis of BJP’s confidence that it would win the LS polls?

Only the BJP is projecting a PM candidate who has won accolades for his governance. As Kiran Bedi said, people would not agree to give power to people with a “learners license”. Experience is the key factor. The people have appreciated the good governance of Narendra Modi.

If the BJP comes to power, will you continue as party chief?

If Modi becomes PM, what would be Advani’s role?

Modi’s candidature has been backed by Advaniji also. Advaniji will continue as supreme leader and guide the party.

There is talk that Advani will be considered as President next time?

It is inappropriate to talk about that now.

Will Ayodhya, special status for Kashmir and Common Civil Code figure in your election manifesto?

If I talk about that it will be grab the headlines.

The BJP national council had opined that it would slash income tax. Will this be included in your manifesto?

Of course. The BJP’s stand is that people should not be burdened with taxes. We are holding talks with financial experts on how to provide tax relief.

How far has the BJP moved in selecting the LS candidates?

The first list has been delayed only because the Parliament session is on. It will be released by the end of this month.

What are the criteria for selecting candidates?

Party workers will get priority. Though the probability of winning is important, we will not compromise on image. Youth will get maximum priority. Of the BJP MLAs who got elected to Rajasthan Assembly, 27 were below 35 years.