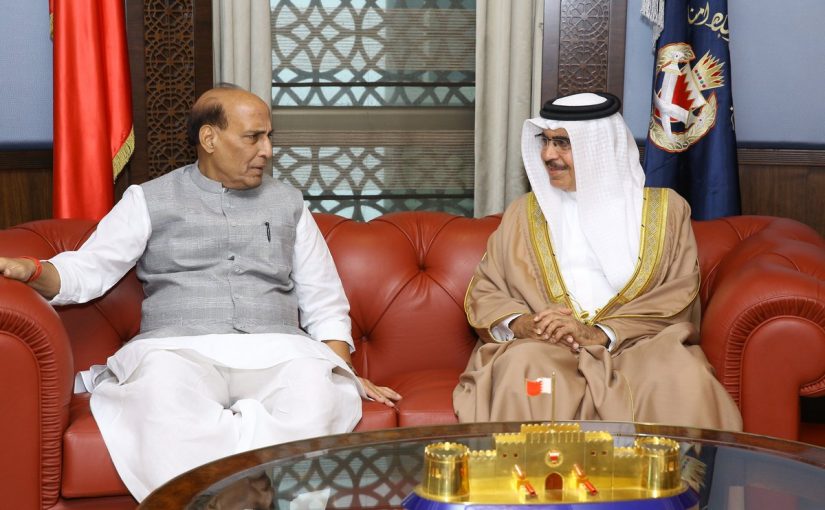 Following is the Text of the Joint Statement issued today after the conclusion of Union Home Minister’s 3-day visit to Bahrain:

The two sides agreed that the historical visit of His Majesty the King to India in February 2014 built a basic foundation toward a strong partnership between the two countries, as well as the creation of opportunities to develop bilateral relations in various sectors.

The two sides also agreed that the exchange of high level visits has contributed to the implementation of important agreements between the two countries. They discussed the visit of HE Interior Minister to India in December 2015 that included the signing of the cooperation agreement on international counterterrorism and trafficking of narcotics, psychotropic substances and chemical precursors.

They agreed on their strong stances against all forms of terrorism, saying terrorism is a hazard to all countries and communities. They rejected the linking of terrorism to any race, religion or culture. They agreed that a terrorist in one country cannot be glorified as freedom fighters by another, and the two sides called upon all states to reject the use of terrorism against other countries, to refrain from interfering in the internal affairs of the state, and to fight terrorist infrastructure whenever it exists.

The two sides also agreed to actively implement the counterterrorism agreement for which a joint committee was formed that held its first meeting in the sideline of the visit. They decided to hold regular committee meetings, in accordance to the clauses of the agreement.

The two sides agreed to reinforce cooperation in (a) exchange of information on ongoing terrorism-related investigations, (b) exchange of information of ongoing organised crime investigations, including terrorism and drug trafficking, (c) determine and exchange information on terrorism financing and organised crime sources and confiscation of terrorism money in accordance to the laws of both countries, (d) study youth extremism and the use of the internet and how to tackle the issue, (e) further cooperation in e-security and (f) fight money laundering.

They also agreed to promote participation in training courses and seminars that are held by the two countries for security officials to exchange expertise on crime fighting and other unconventional threats. They welcomed cooperation in anti-human trafficking and the fight against emerging security threats of the two countries. The two sides agreed to continue high level communication to reinforce security cooperation”.