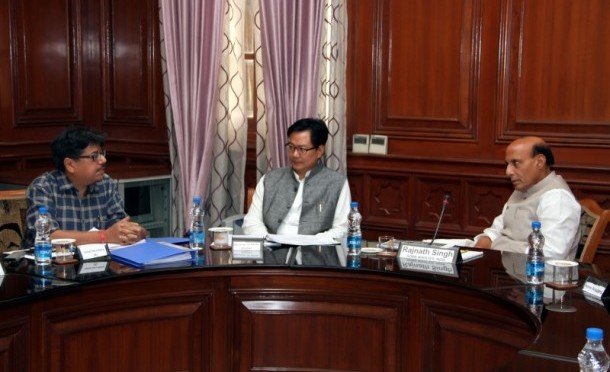 Home Minister Rajnath Singh today asked his ministry to take Kashmiri migrants into confidence for their return to the Valley.

Singh also asked the officials to take enhanced steps to check infiltration from across the border, during a meeting where Singh and Minister of State for Home Affairs, Kiren Rijiju were briefed on issues concerning Jammu and Kashmir.

“The Home Minister asked his officers to ensure that the measures taken up for checking infiltration are further strengthened and also desired the Ministry to take Kashmiri migrants into confidence and work on measures that should be taken up for their return to the Valley,” a Home Ministry statement said.

Issues like security situation, infiltration from across the border, strengthening of fence along the border, rehabilitation of surrendered militants were taken up during the briefing.

Different migrant groups staying in Jammu and Kashmir and Kashmiri migrants who have been displaced from the Valley, developmental projects and Prime Minister Narendra Modi’s reconstruction plan for Jammu and Kashmir were also discussed during the hour-long meeting.

Schemes such as ‘Udaan’ for upgrading of skills of youth in order to improve their employability were discussed in detail at the meeting.

BJP had in its election manifesto mentioned that it was committed to ensuring the return of Kashmiri Pandits to the Valley with full dignity. The number of displaced people post 1990 migration from the Valley following militant activities has increased by six-seven lakhs.

Officials earlier said a comprehensive plan is being worked out for the return and rehabilitation of Kashmiri Pandits with the Narendra Modi government according top priority to the issue.

Enhanced financial assistance, security to life and property, government jobs and other employment opportunities and subsidies ration will be part of the package that could be announced as incentive for the return of Pandits, they said.