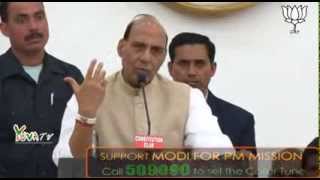 BJP president Rajnath Singh on Monday asked Congress vice-president Rahul Gandhi to take back his “baseless” allegation of involvement of RSS in the assassination of Mahatma Gandhi.

“Rahul had levelled the allegation against the world’s largest socio-cultural organisation saying RSS men were behind the assassination of Mahatma Gandhi. The fact is that the Kapoor Commission, which probed Gandhi’s assassination, had stated in its report that the allegations against RSS on the issue were totally baseless,” Rajnath said while addressing party workers at parliamentary area meet on Dussehra ground.

Taking a dig, he asked Congressmen to study history to know the correct facts.