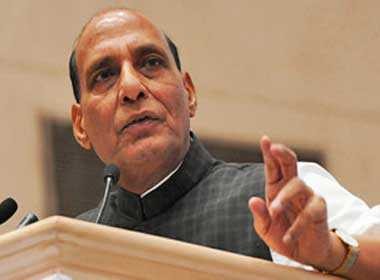 BJP president Rajnath Singh said Swami Vivekananda was the first global youth while addressing a huge gathering at BJP’s Vijay Sankalp rally at Merces bypass organized to mark the birth centenary of Swami Vivekananda. While talking about Goa’s history and culture, the BJP national president said it is not limited to 451 years of Portuguese rule.

“You have to look at cultural and historical connections of Goa prior to Portuguese rule which are not highlighted,” he said while addressing a crowd of about 1 lakh gathered to attend Vijay Sankalp rally, supposedly a BJP campaign for the parliamentary elections scheduled in mid-2014. Raising the question as to why Goa was not liberated in 1947, he blamed the first prime minister of India Jawaharlal Nehru who he said did not make a move to liberate Goa from the Portuguese rule.

He also made a reference to the Pinto revolt of the 18th century, making a point that liberation movement of Goa was initiated in the 18 century. The BJP national head appealed to people to elect BJP’s candidates while criticizing the Congress-rule particularly, prime minister Manmohan Singh and UPA president Sonia Gandhi. “The Congress has ruled the country for 55 years and yet we are counted among the poor nations of the world. There is corruption and inflation.” he said.

Taking pot shots at the prime minister, he said he has taken a vow of silence. When he does speak it is at the wrong time. He (Manmohan Singh) said if Modi becomes prime minister India would be destroyed. “Modi has been the chief minister of Gujarat for three times and today Gujarat has been rated as the model state of development,” he retorted. If the country needs to get rid of its problems, he said India will need a leader like Modi who has a vision. Referring to Modi’s elevation to the post which he said began in Goa, he said Modi has vision, courage and conviction to lead the country.