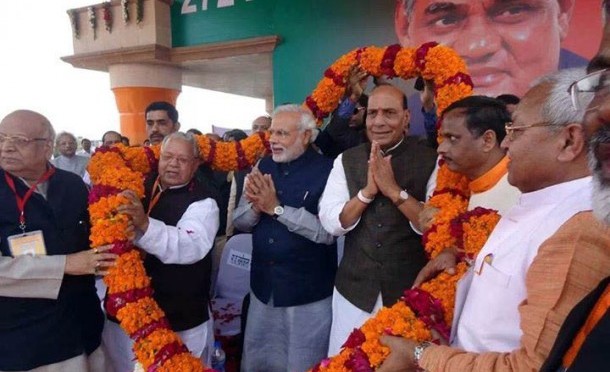 Alleging that the SP, BSP and Congress are hand in gloves in looting the country, BJP president Rajnath Singh today said that India cannot be safe if these parties continue to exist. “SP, BSP and Congress, which used to abuse each other, are hand in gloves in looting the country…the country cannot be safe if they existed. Despite price rise and corruption, both SP and BSP are supporting Congress at the Centre,” Singh said at a rally here.

Taking potshots at the UP government, Singh said people are now left disheartened. “There is no law and order in the state. Women are not safe, The police becomes active when a minister’s buffaloes go missing but do nothing when a child is not found,” he said.

Referring to the repeated ceasefire violation at the border by Pakistan and China and the death of two naval officers in INS Sindhuratana submarine mishap, Singh alleged that the UPA government was toying with the security of the country. He said that once the BJP-led NDA comes to power at the Centre, lapses in national security would be rectified and concrete measures will be taken to provide high quality weapons and equipment to the defence services.

Pointing out the increasing popularity of party’s PM candidate Narendra Modi, he said that the number of political attacks that have been made against the Gujarat CM are more than any other person in the history of Indian politics. The party president also welcomed former UP CM Kalyan Singh back in the party. Singh announced that an important responsibility would be given to Kalyan in the BJP soon.

Earlier, addressing the rally Kalyan had targeted the third front, formed by 11 parties, saying it was “not a third front but a failed front.

He also said that Kejriwal, Mulayam and BSP chief Mayawati are “dreaming to become the next PM”. Former army chief General V K Singh and Udit Raj also addressed the crowd at rally.