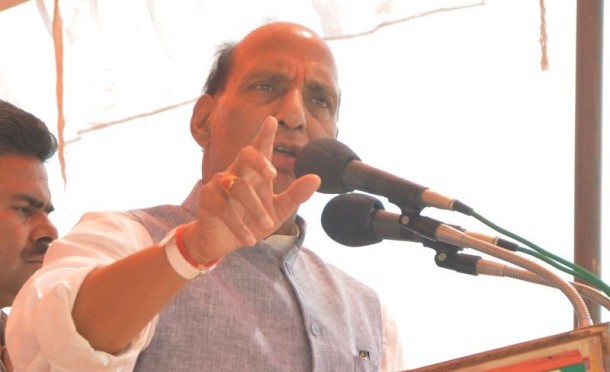 BJP president Rajnath Singh today accused Congress president Sonia Gandhi of “betraying the country” by not taking up the post of the Prime Minister in 2004.

“In 2004, Congress got majority, but Sonia Gandhi did not become the Prime Minister. Is this not a betrayal?” Singh said at a campaign rally at Kathlal in Kheda district.

“Sonia is super PM who is running this government.” The BJP chief also took a dig at Sonia Gandhi’s son-in-law Robert Vadra, saying “we have witnessed many corruption scams…. 2G, 3G, CWG and Jijaji (borther-in-law)”.

“When somebody asked Pandit (Jawaharlal) Nehru if India will ever become strong, he replied that we are engaged in ‘rashtra-nirman’ (nation-building). Even today we are seeing advertisements of Bharat-Nirman by Congress. How long will this Bharat-Nirman continue?” Singh asked.

“There was a time when Indira Gandhi used to say that Jan Sangh (predecessor of BJP) was trying to oust her when she was trying to oust poverty. Indiraji wanted to remove poverty, but to the date poverty hasn’t been removed.” He also alleged that Congress had not fulfilled any promise it made.

“Now they (Congress) had to bring the food security bill.

What was the need for that? They have not fulfilled any of the promises made to the people,” Singh alleged.

He also blamed the UPA government for making the country “weaker”.

“India has been made weaker. Even smaller countries are defying us. China is intruding on our borders, claiming Arunachal Pradesh. Pakistani troops infiltrated into our territory, killed our soldiers, beheaded them, but Sonia and Manmohan were silent,” he said.

“Don’t think that our army is weak. Give it a free hand and see how strong it is. But that needs courage, and the Prime Minister and Sonia Gandhi don’t have this courage.

“You had promised to combat price rise in 100 days (of coming to power…I want to ask Sonia Gandhi why the inflation has increased in Congress’s regime,” the BJP chief said.

Rajnath claimed that there was not a wave but “a tsunami” in favour of BJP’s Prime Ministerial candidate Narendra Modi, and the party would win 300 seats.

“At one point people told us that Modi is politically untouchable, who would give him support. But now for the first time in its history NDA has become an alliance of 25 parties.

Even in Tamil Nadu, BJP-led NDA will get at least 20 seats,” he said.