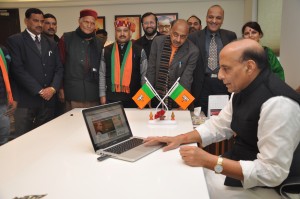 On the occasion of the Indian Republic day, the National President of BJP, Shri Rajnath Singh has extended his greetings to all Indians, all over the world. Going with the spirit of the republic by which our constitution gives equal rights to every citizen in the process of nation building, Shri Rajnath Singh launched BJP’s nationwide initiative ‘Mere Sapno Ka Bharat’ on the India272 portal at https://www.india272.com/meresapnokabharat. Shri Narendra Modi recently shared his Idea of India with all of us. Taking the message forward, this initiative by the Traditional Campaign Committee, under the leadership of Smt. Smriti Irani is aimed at giving a platform to common citizens to share their dreams for India and ways to achieve them. Despite the era of poor governance by the Centre that has led to inflation, nepotism, colossal corruption; every Indian still hopes for a new dawn, a new day that will lay the foundation of the country of their dreams. It is time to transform this dream into reality with small ideas that can make a big difference making our daily lives simpler. ‘Mere Sapno Ka Bharat’ is an idea-centric and pro-people initiative, with its focus on empowering the average Indian to contribute towards Nation building. The emphasis, herein, is to invite ideas from the common man – ideas that will contribute towards improving the current-day governance and working. Mere Sapno Ka Bharat offers a paradigm of change through the online medium, wherein the volunteer simply has to record/click a video/photo, and post them on the India 272+ Volunteering platform. Their thoughts on bettering day-to-day functioning will then be reviewed by a panel of esteemed judges like Kirron Kher and Paresh Rawal. The group of finalists shall be facilitated for a meeting to discuss ideas with BJP’s PM candidate Shri Narendra Modi, who has now captured the imagination of citizens as a role model for good governance. To strengthen the concept of participatory governance the project shall facilitate participation of common people at 60 Venues in Delhi this week. Next week the Volunteers of ‘Mere Sapno Ka Bharat ‘ shall touch 300 venues in 100 cities across India before it starts its statewise effort. For more details please visit the site https://www.india272.com/2014/01/26/meresapnokabharat/