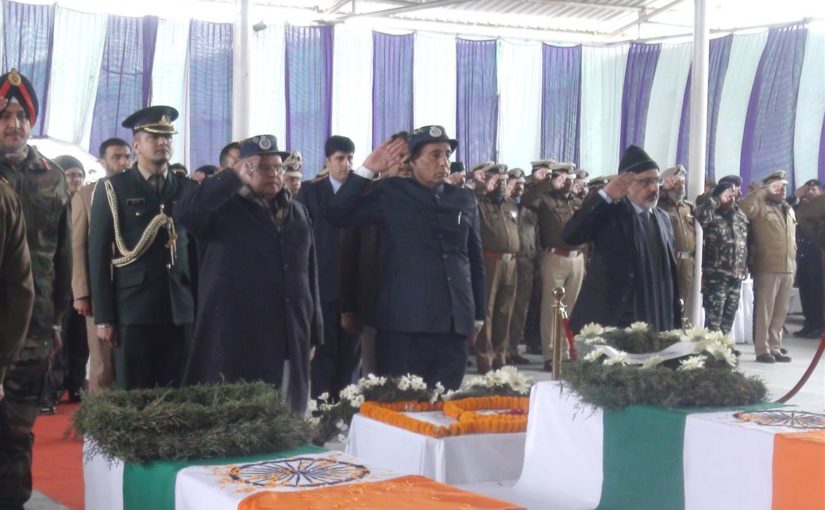 The Union Home Minister Shri Rajnath Singh visited Srinagar to take stock of the ground situation in Jammu and Kashmir in the wake of the heinous terrorist attack on a CRPF convoy yesterday, which resulted in heavy casualties.

The nation will not forget the supreme sacrifice of our brave @crpfindia jawans. Paid my last respects to the martyrs of Pulwama in Srinagar today. Their sacrifice will not go in vain. pic.twitter.com/uJKUoFmKev

The Union Home Minister also visited the Army Base hospital to inquire about the health of five injured soldiers and expressed satisfaction at their speedy recovery.

Visited the Army Hospital in Srinagar to inquire about the health of @crpfindia bravehearts who were injured in Pulwama terror attack. I pray for their speedy recovery. pic.twitter.com/l99d2VO6lT

Later, at a high level meeting attended by the Governor, senior security and police officers, the Union Home Minister reviewed the security situation in the state. Senior CRPF officials narrated the details of the terrorist attack on the CRPF convoy. Senior police officials assured that the perpetrators of the dastardly attack would be brought to justice.

Before leaving for New Delhi, Shri Rajnath Singh addressed a press conference. He said the whole country salutes the brave soldiers who made the supreme sacrifice. He said all state Governments have been asked to extend maximum possible assistance to their families.