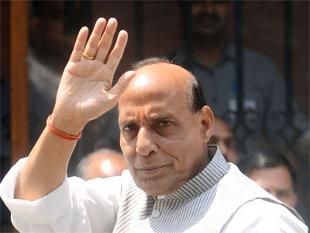 Union Home Minister and BJP President Rajnath Singh today said that rising inflation was a fallout of the policy paralysis that prevailed during the Congress-led UPA regime and added that nascent Narendra Modi government will need time to rein in the price rise.

“The failures of Congress-led UPA government, the kind of policy paralysis prevailing at that time, will have its impact in the country. We are trying to neutralise it and also making efforts to check inflation,” Rajnath told reporters here.

“The country is facing a host of problems and this government has started functioning from last 15 days only. We need some time to overcome them,” he said.

Replying to a query on hike in the rail fare, Rajnath said that it was the decision of the erstwhile UPA government. “I want to assure people of the country that this government, under the leadership of Prime Minister Narendra Modi, will not only ensure that it emerges strong on economic front, but also in other areas,” Rajnath said.

The wholesale price inflation (WPI) accelerated in May at the quickest pace since December, led by an increase in prices of potatoes, fruits, egg, meat and fish, prompting the government to unveil anti-inflationary measures earlier this week.

Meanwhile, replying to a query on the Iraq crisis, Rajnath said that all possible efforts are being made to safely evacuate the Indians who are trapped in that country.

“The Prime Minister held a meeting yesterday in which the External Affairs Minister Sushma Swaraj and the Home Ministry (officials) were also present,” he said.

Rajnath said that the people of the country were aware about the crisis in Iraq from where oil is imported. “I want to assure people that there is a difference between the previous Congress government and the current BJP government. BJP is known for providing good government,” he said.

The Home Minister also expressed satisfaction over the ongoing probe into the Madhya Pradesh Professional Examination Board (MPPEB) scam.

Earlier, addressing the newly-elected MPs and MLAs, the BJP chief asked them to remain committed to their duty and try to fulfil expectations of people.

The session was also addressed by the party’s National Organisation General Secretary, Ram Lal, and Union Minister for Steel and Mines, Narendra Singh Tomar, who is the state BJP president. (Source:PTI)